Many American residential streets have parallel narrow roads where people place their garbage cans and sometimes garages. What are these called? 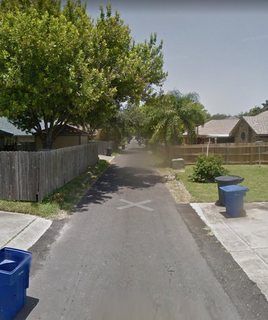 These are often known as "alleys". This applies in a variety of kinds of areas. In districts of very tall buildings, and in areas composed entirely of single family residential streets, or of 2-3 story row houses, small streets or paths giving access to the backs of dwellings are alleys.

especially : a thoroughfare through the middle of a block giving access to the rear of lots or buildings

In the UK and Australia they are called lanes (or sometimes laneways), especially if they are fairly wide and pleasant, as is the path shown in your photo. The term "alley" is different, conveying a sense that the road or path is very narrow (especially if it is unpleasant or rundown). In CBD areas, both "alley" and "lane/laneway" are acceptable terms for the narrow path between tall buildings; the choice will be a judgement call for the speaker. The term "alley" is also common for the narrow, cobbled paths in older, densely-built, inner-city residential areas. However, a wide path behind houses in a low-rise leafy residential area such as you depict would never be an alley, only a lane.

Update: My initial answer implied that the terms "lane" and "laneway" were interchangeable in the UK and Australia. Following comments from several others below, it's become apparent that while laneway is in common use in Australia, Canada and some parts of the UK, the term is not used in other parts of the UK. See also: https://en.m.wiktionary.org/wiki/laneway. The subtle differences between, and regional variations in the use of, "lane" and "laneway" are therefore probably deserving of a separate question.

In northern English cities (more specifically Hull) they are also called "ten-foots" because that is how wide they are.

There's one behind my father's house in Texas.

It's not just an alley, as mention in this answer, but a service alley (because it allows easy access to the rear of houses by service vehicles).

Here is an example of the usage of this term, from a local news bulletin:

Work will begin on Tuesday, Sept. 3, on the new station that will replace the brick-enclosed station on Clay Avenue at the corner of the park near the service alley.

Not the answer you're looking for? Browse other questions tagged vocabulary image-identification or ask your own question.

12
Meaning of 'earth'
2
meaning of whole
6
Is there a name for non-chain, “standalone” stores?
4
Is it called “sale copy” or “business plagiarism” in English language?
1
Synonym for 'place' which is not big
23
What is the English name for the palm's spots of the “working hands”?
3
What are the forehead sides which lack hair called in English?
0
Use of “evacuate” when forced to relocate
0
Outstanding in **outstanding** references to them