What does "crank old Sabbath" refer to?

I'm currently watching the TV show "Breaking Bad" and I dont understand what seems to be slang.

Context: some characters (who are drug users) are listening to music on a brand new sound system. They are enjoying it, especially the light effects. One of the character stands that he could watch it all day, and another answers

"Totally makes me wanna crank old Sabbath and blaze one".

I understand that "blaze one" means smoking marijuana, but I dont understand the beginning. To me it could either be a reference to Black Sabbath (metal music band) but they are listening to rap-music, or it could be a jewish reference but I dont think any hint indicates that the talking character is Jewish (I may have missed the reference though).

If you crank an engine or machine, you make it move or function, especially by turning a handle.

While this definition does not fit in perfectly, it can be used informally to mean to turn something on and then increase the intensity (e.g., crank up the radio).

Edit: The meaning of the phrasal verb "crank something up" is "to increase or improve something" (Cambridge).

This is the meaning that is implied in the Breaking Bad context/dialogue - "makes me wanna crank old Sabbath". I did not use this definition initially because of the missing "up" in the dialogue. Without the "up" it is just the verb "crank" which I did mention.

In this context, it means that the brand new sound system is so great that it makes them want to play some music from Black Sabbath (at really high volume) while smoking marijuana.

Edit: Note that the transcript for the episode says "Savage" (as pointed out by Em in the comments) but the subtitle (in the ones I checked) says "Sabbath". I am not familiar with either, but I presume they make music.

As mentioned by AIQ, crank [something] means to make the something operate or function, especially by crank. The relevant device here is the stereo.

When it comes to music, we can say crank it up! to mean turn it up, turn up the volume:

Given all this, we understand crank [artist name] to mean play [artist name] (on the stereo), especially loudly. In this case, that artist is "Sabbath", which short for the band Black Sabbath, as you suspected.

I checked this transcript, and it says "old Savage". Wikipedia says Savage is a rapper, which makes a little more sense in the given context. Regardless, the usage of crank [artist] is the same.

I also wanted to make a minor point about “old”. Let’s pretend for a moment that the speaker says “Sabbath”. Notice that it was not just “Sabbath”, but “old Sabbath”. This seems to me like a joke by the writers. Often, when an artist becomes really big, or mainstream, the original fanbase will complain that the artist’s new music sucks. They don’t want to hear the new stuff. They want to hear the old stuff.

In addition to the possibility that it is a shortened version of "crank up" (i.e. increase the volume) suggested by the other answers, there's also the fact that old-fashioned record players were literally operated by crank. So perhaps the speaker is thinking of playing old Sabbath on something like the image below (credit: Fredrik Tersmeden, from wikimedia commons), or just using "crank" to refer to a turntable in the same way that we still use "dial" when referring to phones which no longer have a dial. 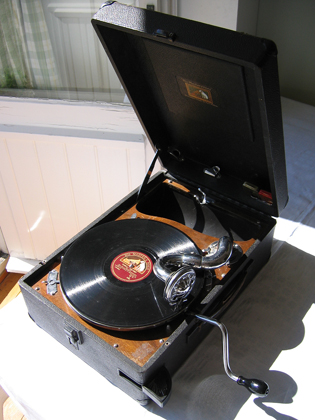 "Old [Black] Sabbath" probably means from 1970-79, under their original line-up with Ozzy Osbourne; their sound did change somewhat after Ronnie James Dio replaced Osbourne (and Vinny Appice subsequently replaced drummer Bill Ward). This period includes the album Masters of Reality, which is often cited as the first example of "stoner rock" (see the Wikipedia article of that name); in addition to being a major influence on the genre's sound, its opening song Sweet Leaf is about marijuana.

Not the answer you're looking for? Browse other questions tagged meaning-in-context slang .