"When you Frankenstein a team together..." - Is "Frankenstein" a new verb?

I did not know that "Frankenstein" can be used as a verb.

"When you Frankenstein a team together, usually it doesn't work out that first season ..."

Source: Stephen A. to LeBron: Kawhi is coming for you, do something about it! from 43 seconds.

This is in regards to the Los Angeles Lakers NBA team. Max Kellerman and Stephen A. Smith are talking about how Lakers' can't win a championship this year because they have recently traded in two really big time superstar players - Lebron James and Anthony Davis (AD) - and a bunch of other mediocre players and this is their first season/year playing together.

I have a pretty good idea about what Max means, but I couldn't clearly write it down if I had to.

I think Max is saying that Lebron, AD, and the others are equivalent to the limbs and body parts of the monster - they are great individually. But now that you put them all together - essentially bringing Frankenstein to life - it won't work out as expected in the first attempt (season).

I can't find a "verb" entry for "Frankenstein" in Cambridge, Collins, or MW.

Cambridge: Frankenstein (n) - something that destroys or harms the person or people who created it.

Collins: Frankenstein (n) - (1) a person who creates something that brings about his or her ruin (2) a thing that destroys its creator (also called Frankenstein's monster).

in order for the word "Frankenstein" to be used as a verb?

The "noun" meaning should be at least close to the implied "verb" meaning, which does not seem to be the case based on the definitions.

It surely does not simply mean "put a team together". Does it then mean putting together (initially incompatible) great pieces or people in a unit?

It's a figure of speech, known as anthimeria: the use of a word in a part of speech other than its customary usage.*

Ordinarily, Frankenstein is a proper noun referring to a fictional monster originally from the 1818 novel Frankenstein by Mary Shelley and later made into numerous horror movies, most famously a 1931 movie starring Boris Karloff. The movie version is the best known: a monster created by stitching together body parts gathered from several corpses and brought to life by zapping it with electricity. The Frankenstein monster is usually portrayed as an ugly mess, with the stitches visible, green skin, a lumbering walk, and bolts sticking out of his neck. 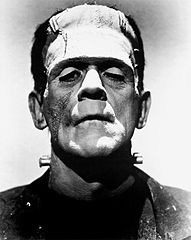 Boris Karloff as the Frankenstein monster

Mark Kellerman's figure of speech draws an analogy between the Lakers and the Frankenstein monster: both were "stitched together" from parts (basketball players or body parts) that don't fit together well. There is no implication that the players are individually great. The Lakers and Frankenstein lack the organic unity normally found in a smoothly functioning team or a living organism. Notice that in Kellerman's next sentence, he elaborates on the idea of unrelated parts stitched together: "It took so much to get the big parts together, to get the details right around them is going to take another year of figuring it out…"

There is no need for the noun "Frankenstein" to already have an abstracted meaning close to that of the figurative verb. With figures of speech, the only limits are what analogies you hope your listeners can follow. If "Frankenstein" as a verb made only a tiny jump from the meaning of the noun, it wouldn't be punchy. The power of figurative language derives from the leap that a listener must make to understand it. Evoking the specific, concrete story and image is what makes this figure of speech so pungent. The story includes notions like digging up bodies from a graveyard and a mad scientist trying to force life into them with an artificial electric jolt. These details influence how the listener interprets the figure of speech—that is, how the listener is led to view the Lakers. A generalized abstraction would lack the color and emotional resonance that those concrete details provide.

Yes, you can make this figure of speech with most fluent English speakers and expect to be understood without any explanation—even though it's surprising and unusual. The Frankenstein monster is a very well known cultural landmark. The picture above is iconic; the word Frankenstein brings it to mind. Frankenstein is even a standard Halloween costume for children.

Anthimeria is common in English, especially the use of a noun as a verb, often called "verbing" a noun (an instance of itself). It's especially popular in advertising. Here are a few more examples:

Unlock your more. (An advertising slogan that uses an adverb as a noun.)

Come TV with us. (Another noun used as a verb.)

He recycled this gift! He's a regifter! (From an episode of Seinfeld. A noun used implicitly as a verb used implicitly to make another verb ("regift") used to make a noun for someone who does the verb. This all happens in one leap and no one has difficulty following it.)

Listen to this. Marzy comes over and tells me that her ex-boyfriend was over late last night, and "yada yada yada, I'm really tired today." You don't think she'd yada yada sex? (Also from an episode of Seinfeld. This (famously) uses nonsense filler syllables as a verb.)

* But you should know that "anthimeria" is an obscure word. Few fluent speakers have even heard of it.

This is called verbing, the practice of using a word, most likely a noun, as a verb. The most effective and popular way to verb is with new/unique/special concepts, as in your example.

Frankenstein, as you probably know, is a well-known and well-popularized book by English writer Mary Shelley. Here the author of the ESPN piece uses this cultural reference to say "put together a team," the same way Frankenstein pieces together his creation, as you have correctly noted. (Note that contrary to popular misconception, Frankenstein is the name of the scientist/creator in the book, rather than the creature. The creature is never named in the book, I believe.)

I can't help but invoke this comic strip to illustrate verbing.

As to whether people will understand the cultural reference, well, I assume the author expects most of their readers to get it. There is of course always a chance that the reader will scratch their head over a cultural reference, but that is also the case every time a popular culture reference is made or an lesser-used idiom is used.

The book Frankenstein was published in 1818 and the verb popped up less than 10 years later:

I want some Howard Paine to sketch a skeleton of..scenes..and I'd Frankenstein them there.
Letters by Charles Lamb, 1827 (via the OED)

Even if someone hasn't read the book, most people will know who Frankenstein (more properly called Frankenstein's monster) is, because of Halloween. Therefore, the meaning of the verb will be fairly clear to most people, even if it's not used that often. It's definitely informal, though.

I'm surprised that nobody has approached it from this angle, but...

Frankenstein is not the name of the monster!

In Shelly's original novel Frankenstein, or The Modern Prometheus, and almost every adaptation since, it is Doctor Frankenstein who created the monster, so the use of "Frankenstein" as a verb here is following the same pattern as to lynch or to boycott: verbs named for a famous (or notorious) person. (Co-incidentally, both of these men were named Charles: Capt. Charles Boycott, a land-agent in 19th century Ireland; and Charles Lynch, Virigina Justice of the Peace in the 18th century, who organised mobs of citizens to hunt suspected criminals)

As Frankenstein constructed a complete being from fragments of other bodies, Kellerman's use of "Frankenstein" as a verb in the original is apt: the new team was constructed by assembling parts of many other teams. There's also a suggestion that some of those parts may have been of less than top quality.

Because "Frankenstein" (as the monster) is a literary metaphor, this is not really an English language question at all. When used as a verb, the metaphor should have the same potential meaning in any language, at least to those familiar with the reference.

Let me give a similar example to illustrate what I mean. Suppose I know a group of three friends, and I tell you

The novel "Les Trois Mousquetaires" was originally written in French, but as a metaphor for something like

a close group of three friends who stick together, no matter what

it works in any language. In the same way "to Frankenstein together" makes sense if you understand that Frankenstein's monster was assembled from parts of various cadavers, and given life with a bolt of electricity. The exactly intent is ambiguous, but can usually be gleaned from context.

My point is that the opinion of a native English speaker is no more likely to be valid than that of a well-read non-native speaker. As you say, you already have a fairly good idea of what this phrase means in this context, so consider this validation.

In the automotive and manufacturing environment, I have heard Frankenstein used adjectivally (as an attibutive noun): "Frankenstein bolts" are large bolts that stick out like those on Boris Karloff's neck.

Not the answer you're looking for? Browse other questions tagged word-usage verbs figurative-language verbing .

0
The choice of verb when you are doing something for someone as in "I'm feeding the kid"
4
Can 'sheep' be a verb?
2
Usage Of "Resist"
2
What is the verb which means "put together (a plan)" and sounds more formal?
4
Believability Weighted
2
Is "disproportionate" word correct in this context or should I use other?
0
Is "move in" ALWAYS a phrasal verb?
1
'team' or 'teams' when refering to a specific team?