I am learning Duolingo English course, one sentence is we make soup with pieces of meat. and the other one is We make a soup with the roots. When should I use a?

This can be tricky when make is in the present tense. Let's say I regularly make three kinds of soup: taratino soup, squamil soup, and Droverly soup.

Let's also say that I put chicken in all three recipes. In that case, it would be fitting to say:

I make soup with chicken.

Now, let's add one more fact: I use fresh kale when I make my squamil soup, but neither taratino soup nor Droverly soup use kale. In that case, I can say:

I make a soup with fresh kale.

I think it's worth pointing out that, in this context, we are dealing with Definition #6 from Collins: 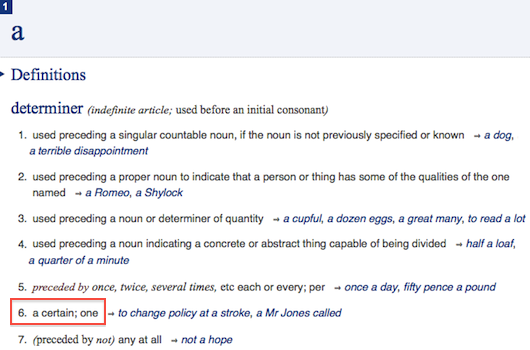 Now, let's move to the past tense. Suppose I made soup last night, and I used some orzo. I can say either:

There's no difference in meaning; they both mean the same thing.

Likewise, there's no difference when we use the present progressive tense:

That's because soup can act as a mass noun (so no article would be required), but it can also take an article, whereby a soup essentially means a batch of soup.

4
"Society" with no article before it?
3
(The) Soup Of The Day
2
“A special interest” vs. “special interests”
3
Article the with the word "disruption"
0
"Be in red" or "be in the red"?
1
The use of articles
16
Is it not correct to say "I have the brown eyes" instead of "I have brown eyes", and why?
1
Which article we can use with word 'Rain'
2
should I use "the" when talking about city features
0
identifier variables with pure glass