What does the sentence "Her welcome was as warm as Tom's three years earlier had been frosty" mean?

I cannot understand the sentence above. What does it mean?

The sentence below contains a comparative:

However, rather than comparing a single object to another (this tea to that tea), there can be a comparison between two different adjectives used to describe the state of the tea. Two different states can be compared:

So, let's apply that to the sentence the question:

Tom's welcome occurred "three years earlier" or before the welcome given by woman signified by the she pronoun.

The past perfect is used because the first clause is in the past tense. This is a normal sequence of tenses.

Summary: a comparison of two different states or types of welcome, described in the past tense, with a regular use of a tense sequence: past tense (was) followed by a past perfect (had been)

The key concept in your sentence seems to be intensity, or high degree.

In other words, her welcome was intensely warm, or there was a high degree of warmth in her welcome.

Tom's welcome (if it can be called that!) was intense in coolness, or there was a high degree of coolth in Tom's "welcome."

Both welcomes had an intensity about them but in two different directions--one positive and one negative. The negative, of course, was coolth; the positive, warmth.

Even as a native speaker of English, it took me a couple a couple times to understand this. It is a perfectly good sentence, though, and I've seen sentences like this many times in writing. I'd say that it almost certainly is the most native way to say that, even if is a little confusing. (It actually has a very literary sound because of the fact that it takes a little more thought to compose than people usually have time for when speaking.) As others have said, it means that the intensity of "her welcome"'s (metaphorical) warmness is the same as the intensity of "Tom's (welcome)"'s (metaphorical) frostiness. If you have time to read a longer discussion, here it is.

I think part of the reason this sentence is so hard to parse is that so many of the words derive their meaning from parts of the sentence that aren't right next to them. Here's a diagram. 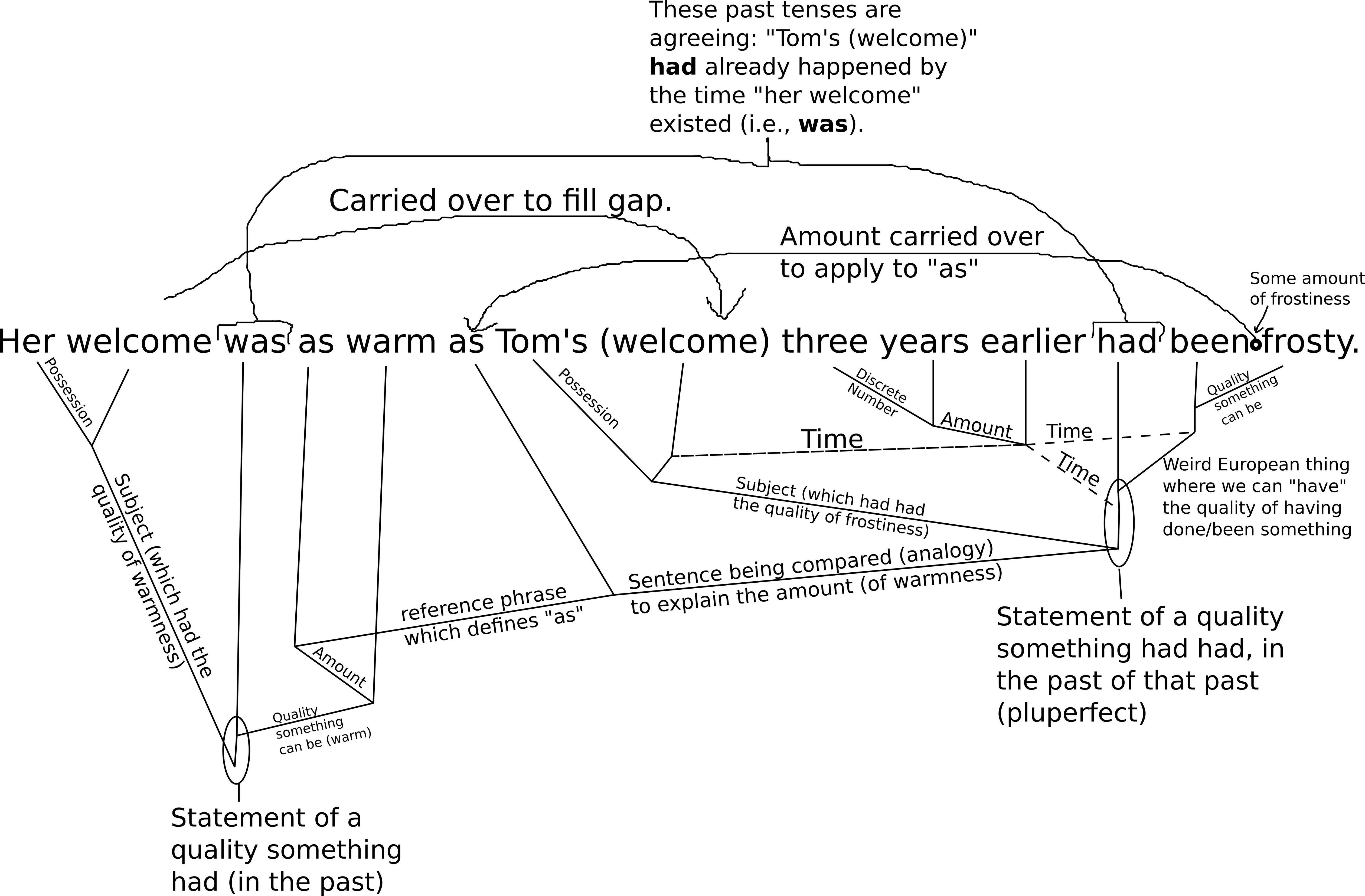 ("Earlier" is usually adverbial (modifying verbs), but, in my brain, I feel like it's describing the Tom's welcome itself. That's why I drew all it's modifying lines as dashed lines.)

I didn't really figure this out until after I drew that picture, but this is how I would describe the syntax of the "as ... as" construction. The first "as" is a quantifier for an adjective, which must come after the word to be. Quantifiers are one type of modifier that only modifies adjectives and adverbs. Other examples are words like "very", and "slightly". This quantifier usually occurs with a dependent clause started by a second "as". In these cases, the first "as" means "in the same amount or with the same intensity as in the second 'as' clause". It is also possible for that first "as" to be used by itself especially if it is modified by the word "just", as in:

In these cases, the second "as" clause is actually implied. This sentence really means that her welcome was just as warm as something else your supposed to already know (presumably because it was recently mentioned). (Note that the "just" is actually a way of emphasizing the exactness of the comparison. One could also say "Her welcome was about as warm." to mean the comparison was approximate. The distinction doesn't really mean much here since we're talking about subjective judgements.) (This example will be returned to later.)

Another potential reason why the sentence you gave could be confusing is that, in "as ... as" comparisons, the clause (i.e. sentence inside a sentence) following the second "as" usually has more in common with the main clause. For example:

In this sentence, both were welcomes were warm, so you could think of this sentence as just taking an exact quality (warmness of a certain intensity) and transferring it from Tom's welcome to "her" welcome.

EX3: "Her welcome was as warm as it was sudden."

In this case, there are two qualities, but both are qualities of the same thing (her welcome). It's might seem a little odd that the "it was" is mandatory here, but it's easier to parse because only one thing (the quality being discussed) is different between the two clauses.

This sentence is theoretically similar to EX3, in that "expected" is basically an adjective. The difference is that "expected" really carries the meaning of "expected to be warm". In order to say that the welcome was simply expect to happen, you would have to say, "Her welcome was as warm as it was expected.", and even that would probably be interpreted as just a weird way of saying EX4.

This might also be slightly odd, because of the implied infinitive clause, but it similar to EX2 in that both the the welcome itself and the expected welcome were warm.

Something to note about these examples is that, in every case, the actual meaning of the "as ... as" coordinating conjunction is to say that the amount or intensity of the quality is the same in both clauses. All the other similarities (which are typically omitted in the second clause as a way of saying they are the same) are beside the point, except that they may make the comparison more relevant.

Your Example: "Her welcome was as warm as Tom's (welcome) three years earlier had been frosty."

This comparison seems much more odd than the previous ones because everything about the compared situation, other than the intensity, is different. The subjects are different ("her welcome" vs. "Tom's (welcome) three years earlier"). The qualities are also different (warmness vs. frostiness). The only thing that is the same in this case is the intensity which this sentence is explicitly stating is the same.

What else is odd about this comparison is that these meanings of "warm" and "frosty" are actually gradable antonyms. That means they exist along the same continuum. One could treat them as simply being different parts of the continuum, but, by using a quantifier (the first "as") this sentence is treating them as gradable qualities that can exist in different amounts. A strange consequence of this is that, if one considers numbers to extend infinitely in both directions, frostiness could be considered a very small (or maybe negative) amount of warmness, and warmness could even (marginally) be considered a very small (sim.*) amount of frostiness.

What is implied by your example is that there is some theoretical kind of "neutral" welcome, relative to which the "warm"ness or "frost[i]"ness of any welcome can be measured. Thus "her welcome" is just as much warmer than the neutral reference welcome as "Tom's (welcome)" is colder ("frostier") than it. (Most people probably don't think about that consciously when they say/write/read/hear it, but I think that is basically the model necessary for it to make sense.)

*I think "sim." stands for similar. It means that a similar comment to the one written before applies. Similar terms in different contexts are "ditto" and "ibid." (though both of those imply exact identicalness, which is what I actually meant by "sim.").

*You probably won't find that use of "parallelly" in the dictionary. I meant that both situations are the same in structure, or "parallel" to each other. (One could "draw a parallel" between them.)

3
What does "This was clearly her day off?" mean?
3
What does the sentence "What do you understand about your business that other companies in it just don't get" mean?
5
Kyle had been born four years to the day after her mother had died
1
I like snowboarding; I have been DOING IT for 10 years.- Is the second sentence correct?
0
What does "It has been five years since Peter worked here" mean?
7
"Borne her in." What does this sentence mean?
0
is this sentence grammatically correct? What does it mean?