Why does it have to be 'scissors' and not just 'scissor'?

I'm wondering why I need to say scissors instead of just 'scissor'. Are there any rules about it?

I would think that I only have one scissor, meaning it would be singular and not plural. (That's at least how it is in my native language.)

This would only be one scissor in Danish. 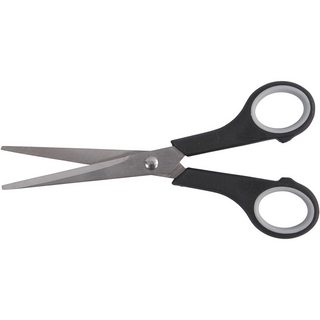 Can anyone tell me why it needs to be plural?

"A plurale tantum (Latin for "plural only", plural form: pluralia tantum) is a noun that appears only in the plural form and does not have a singular variant for referring to a single object. In a less strict usage of the term, it can also refer to nouns whose singular form is rarely used.

In English, pluralia tantum are often words which denote objects that occur or function as pairs or sets, such as spectacles, trousers, pants, scissors [...]."

Scissors is an example of a plurale tantum, or an English word that only has a plural form that represents a singular object. (Plurale tantum is not a plurale tantum: its plural is pluralia tantum). Though pluralia tantum name single objects, they are grammatically plural: "the scissors are on the table," "my pants are in the dryer." The shenanigans of English are myriad.

Nouns like scissors,pants, trousers, etc. can be used as is in the singular.

However, in the plural, we must add the word two or three to the word pairs, etc.

“Scissors” is one of a small group of English words that are always used in plural only. Others are trousers, pants, glasses (as in glasses that you wear in front of your eyes to fix problems with your eyesight), (weighing) scales.

Often you will use this in combination with “pair”, like “a pair of trousers”. For weighing scales we used to use pairs of scales, with weights going into one scale and the item to be weighed in the other, modern scales very often have one physical scale only but are still called “scales”.

0
Confusion about scissors being a plural word

3
What are any subtle differences in conveyed meaning when varying a slogan slightly?
1
How to refer to *one side* of headphones?
1
Which one is grammatically right? : " Population" or "Populations"
1
Why do we use the plural "chances" and "odds" to talk about probability?
3
Why is the answer singular and not plural? (Phenomenon/Phenomena)
0
Plural + like + singular, plural or singular?
0
I take drugs, or I take drug