Ok, look at these pictures

A man may have been in a standing position & suddenly fell off with his head coming into contact with the floor first before other parts of his body (back, legs, etc). 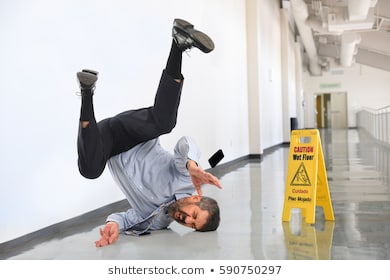 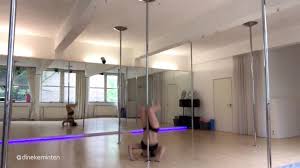 fall (verb): 2 STOP STANDING/WALKING ETC [intransitive] to suddenly go down onto the ground after you have been standing, walking, or running, especially without intending to

I fell and hit my head.

He slipped and fell on the ice.

fall down
Lizzie fell down and hurt her knee.
Peter was playing by the river when he fell in (=fell into the water).

She fell to her knees beside his body.

dive: 1 JUMP INTO WATER to jump into deep water with your head and arms going in first dive into/off etc

She dived into a pool.

Diving off the cliffs is dangerous.

"Dive" implies more deliberation than "fall", true, though you may hear "fall" if the dive was made to look like a fall.

In the image, to me this looks very deliberate and seems to be an actual "move", so I think it would actually be just:

She did a headstand.

Following the additional pictures, I would say this as:

She fell and landed on her head.

She fell on her head.

I prefer the first version of the two above (and don't think the second is anywhere near as idiomatic - it's not as clear in its meaning).

"She fell and hit her head" wouldn't work as she could have hit her head anywhere without landing on it (e.g., on the wall or a table, etc.). "She fell on her head" has a similar problem actually, though it still makes sense.

The "landed" in "She fell and landed on her head" makes it very clear that her head hit the floor first.

For the image with the warning cone, you may also hear this as:

He slipped and landed on his head.

In the posted picture, he fell and then hit his head.

I have never heard of a person falling on a floor and having their head hit the floor first. The shoulder would hit the ground first and the head second. Unless that person were upside down when he or she fell.

For the head to hit the floor first, it would be something like this:

If you google this, you will find "fell and hit his head" is the most likely phrase.

In picture 2, the pole dancer fell on her head. Period.

2
dives into the water
1
can we use “trip over the floor” to express “you fall because your flip flops, sandals, etc have too much friction on the floor”?
0
Do we say “to slide down with your legs going first” or “to slide down legs-first”?
1
A boy ran into a chair & made the chair fall off, can we say “you fell the chair”?
0
How to express this action in English “He waved his soaked hands at my face for fun”: He flicked the water from his soaked hands onto my face?
1
what are the differences between the verb: “flick” and “flip”?