Why does propriety need to be vindicated? 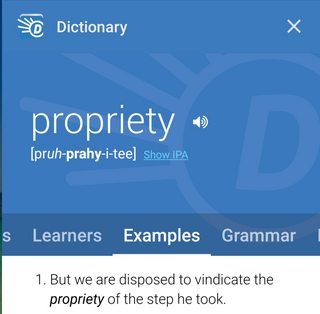 But we are disposed to vindicate the propriety of the step he took.

Or does it mean those people feel inclined to justify that the step he took is in fact proper?

What I mean is does propriety in this sentence mean "political correctness" or "proper-ness" (for lack of a better word)?

Or does it mean those people feel inclined to justify that the step he took is in fact proper?

I would read the sentence to mean that, because of some context provided by other sentences, we would tend to feel that the step he took was proper, correct, moral, and not in breach of social norms, and that this step may have seemed improper without that context to justify it.

does propriety in this sentence mean "political correctness"

No, "political correctness" is not a synonym for "propriety". It has nuances that do not apply here, and is a bit more complicated.

When people use the term "being politically correct", it's usually because they've been criticised for using language that is demeaning to some particular social minority, and when such language has only relatively recently (to the speaker) come under criticism by society as a whole.

The term "politically correct" projects the concept is that is it no longer wise to use certain terms or behave in a certain way due to the political climate, but very specifically because the social politics have recently changed about whether the behaviour is acceptable to the majority (when it was never acceptable to the minority).

For example, white people who grew up in a time when it was socially acceptable to denigrate black people might say that not using n**** is "being politically correct".

3
What does "crack" mean in this sentence?
8
Why do you always "go down the street"
0
'feel interesting vs feel interested'
1
What does this paragraph in Media Politics mean?
0
Usage of "condemn" in this sentence
3
What does "persecutory trends" imply in this definition?
0
What does 'cut cleanly' mean?
0
Make up for "in something"
13
English equivalent of the Russian idiom "притянуть за уши" + opposite of "to abbreviate"