How to express idiomatically in this situation: please slide in the middle of the slide or stay away from the edge?

Look at this picture 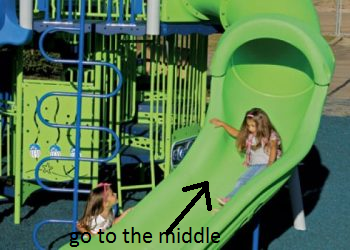 The kid seems to slide on the edge of the slide, which is dangerous as she may fall off. I want her to slide in the middle of the slide.

What should I say "please slide in the middle of the slide or stay away from the edge"?

But, do we have a common expression that can be used in other situations?

For example, a kid may sit on the edge of a table or a chair, which is dangerous.

Or, someone walks on the edge of a bank which may fall into the river.

DO we say, "please do/go in the middle of... & stay away from the edge"? or Do we have an idiomatic way to express them?

When speaking to children, generally idiomatic expressions relating to safety are the exception rather than the norm. I would likely choose something direct:

Make sure you stay in the middle!

Stay away from the sides!

Though, you could of course say something indirect though not necessarily idiomatic:

If you really wanted an idiom, you could use something like:

At least in the UK, to "go flying" is often used to mean falling over, tripping up, falling off something, etc. in an unexpected manner. However, I don't think I'd use this unless the child already knew how they might "go flying."

0
Using "a far cry from" not for achievements
25
How can I describe being temporarily stupid?
0
How to express these actions in English: She is hanging / swinging on the roof of the castle?
0
Do we say "to slide down with your legs going first" or "to slide down legs-first"?
0
How to express this action in English "He waved his soaked hands at my face for fun": He flicked the water from his soaked hands onto my face?
0
Would I say "Don't move to the edge of the bed. Move to the middle of it" or "Don't move onto the edge of the bed. Move into the middle of it"?
1
How to express to remove peanuts' skin with your fingers in English?
0
Is it wrong to say "Make sure you wipe his paws off before he comes in."?
0
Is it natural to say "the cup is on the edge of the table, push it in please"?