I read it somewhere in an authentic news (I think from the BBC). It was about recently elected Mr. Narendra Modi. He's the next Prime Minister of India.

I surely remember the sentence that said...

The chief minister of the western state of Gujarat. 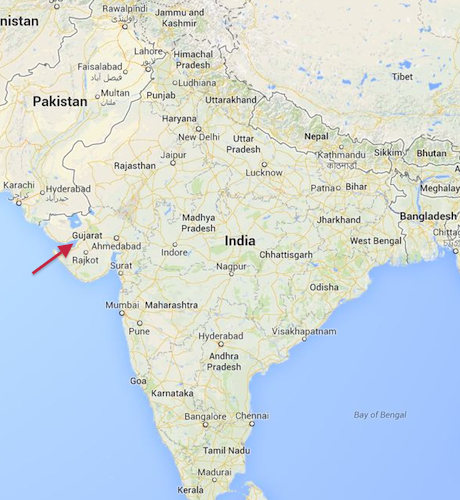 Check the position of the state of Gujarat. It's in the west of India, the west-most corner I mean. Ahmedabad and Rajkot are the cities of Gujarat State. India has 28 states and Gujarat is one of them. There's no county, province etc. It's clear Country-State-District-City.

The chief minister of the western state of Gujarat.

Western refers to the location of Gujarat within the (implied) country of India.
of Gujarat specifically names the western state.

The chief minister of the western state of India

it is saying India is the name of the western state.

However you could say:

The chief minister of a western state in India(, Gujarat)

It has to be a western state because there are many states in the west. Possibly you could say of India, but in India sounds more natural because all the states are in India.
Then you could add Gujarat to define which one you are talking about.

Looking at your comments, I see this is an article problem.

As the others have said, the way the sentence is worded is fine. We can say:

(A) ...the chief minister of the western state of Gujarat.

We could also use the indefinite article, but the sentence would need to be restructured:

(B) ...the chief minister of Gujarat, a western state [in India].

Sentence B means there are at least a few western states in India, and Mr. Modi governs one of them. However, in the first sentence, we are pinpointing the state (Gujarat), by using the definite article.

(C) ...the chief minister of Gujarat, the westernmost state in India.

In this case, it just means that Gujarat is a western state.

The reason for this is that if there is more than one western state, without more context you cannot know which state is being referred to, and so you use the non-specific determiner.

It may be helpful to look at the nominal group in this way:

6
"India has" or "India have"
2
Why the definite article in "in the gas state"? Why not "in gas state"?
0
Why is there no definite article before "Western democracy"?
6
"Western" vs "West"
0
Article usage in "A State of Trance"
1
the idea of the reviving the old-fashioned western
0
Choose the correct answer between "shouldn't" and "mustn't"