could we use the verb “poke” without an agent who caused it?

poke [intransitive, transitive] to quickly push your finger or some other pointed object into something or someone

poke somebody/something with something

Andy poked the fish with his finger to see if it was still alive.

poke somebody in the eye/arm/ribs etc

Be careful with that umbrella or you’ll poke someone in the eye.

He was poking at the dust with a stick, making little patterns.

Let's say, there is a stick emerges from a ground & a kid is playing near there as showed in this picture. 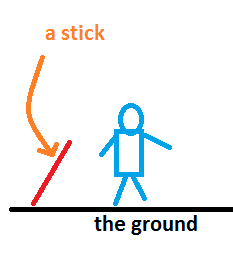 Could we say "Watch out for the stick! it (the stick) may poke into your eyes"?

However, according to the above definition, the verb "poke" can only be used if a person pokes the stick into someone's eyes. The stick can not poke by itself.

According to this definition poke someone in something we can easily say:

And it will be grammatically correct.

But in my opinion that sounds weird since I seem to see the stick as a living being.

1
Whether one could use the verb drink with ice-cold tea?
3
Could 'being' use as a main verb?
0
What verb should I use for someone who 'deal with' internal circuits very well?
0
“Could use = want” always?
0
How to express this action in English “He waved his soaked hands at my face for fun”: He flicked the water from his soaked hands onto my face?
1
what are the differences between the verb: “flick” and “flip”?
0
are they valid and roughly similar: “The dog bit into his leg”, “The dog bit him into his leg”, “The dog bit his leg”?
1
Is it idiomatic to say “don't bite me in the arm”?