About the sentence structure "Do you see where the sign is?

This is from a textbook for ESL students.

At the information desk, a lady asks, "Where is the restroom?" A man says, "It's just behind you. Do you see where the sign is?"

Is this sentence structure "Do you see where the sign is?" the same as, for example,

"Do you know where the restroom is?"

If I take this sentence as a relative clause, does it work?

And we're done! Those are the basic steps. They can be a little bit different for other sentences, and I've written up some more examples over here, but for this question we're going to ignore those details and move on. We've got ourselves a question!

Subordinate clauses can be relative, but not all of them are. The name for a basic type of subordinate clause without any special function (relative or comparative) is "content clause", and that's the name I've used so far.

But you could use a clause like this as a relative if you wanted to. For example:

Here, "where the sign is" is a relative clause modifying the head noun "school". But there's no such relationship in the other examples, so we have no reason to call them relative clauses. That's why I used the term "content clause" instead earlier.

In short, your examples have the same structure as one other, but they're not relatives. They're interrogative content clauses.

I think the answer of where it is is finished in the very first clause it's just behind you. The speaker further instructs that it's the place with some sign. I'm not sure whether it serves as a relative clause.

To answer your first question -whether the former structure is the same as the latter in your example, I'd say it's not the same. As I said, this is answered just behind you

The relative clause what I think could be something like -

Where's the restroom ~ it's over there, the room with a lady's sign. 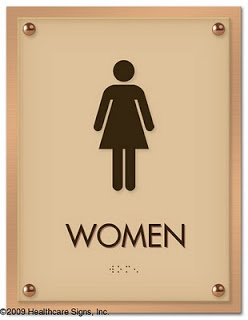 5
Grammatical structure of “goodness knows where”
0
What is the grammatical name of structure of “having cleaned”?
3
Relative adverbs or relative pronouns
0
The sentence grammar for “I wanted to gorge myself, gorge I did.”
1
May not only take… but also it MAY
1
Relative clauses using “in” or “with”?
1
relative pronoun + to. introducing a relatve clause?
0
Hello, I'm so confused about this participial clause sentence