I guess these 3 sentences are all idiomatic.

However, I am not so sure if these 2 sentences are idiomatic

In addition, These 3 sentences confuses me much more.

The most important thing is, I just don't know the grammar standard for this kind of cases. Could someone give a link or some keywords?

This video gives a different one 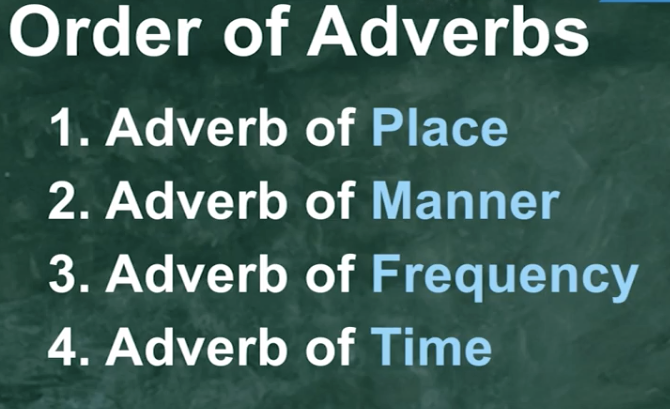 Which one should I choose?

I guess the order in that video is incorrect as comments below the video pointed out, though I did find a solid reference for the Royal Order of Adverbs.

It is unusual and odd to use the adverbs "usually" or "always" at the end of the sentence.

The adverb usually refers to what typically or normally happens. We use it mostly in mid position, between the subject and the main verb, or after the modal verb or first auxiliary verb, or after be as a main verb:

The same rule applies for "always."

Note, that even if "usually and "always" are adverbs, the rules about their position are not necessary the same as for other adverbs (early, slowly...).

Additionally, it sounds odd to use "usually" or "always" in a row with another adverb ending with -ly, like: "He wakes up early usually." It's better to say: "He usually wakes up early."

Not the answer you're looking for? Browse other questions tagged adverbs word-order or ask your own question.

0
Does “I play football at the park near my house every Tuesday evening.” sound natural?

12
Where is the correct place to place adverbs in sentences?
2
Why are these adverbs sentential, and not regular, adverbs?
3
Adverbial/Adjectivial phrase placement
1
Natural position of adverbs
3
Multiple vs. Several
1
Can “also / as well / too” and “always” be in the same sentence?
0
often + used to
0
the position of “necessarily”
0
Proper position of the adverb
1
Adverb of frequncy, word order question