'Golden spoon' or 'Gold spoon' -if the spoon is made of gold?

A golden spoon or A gold spoon

What to use? A spoon is made of gold. 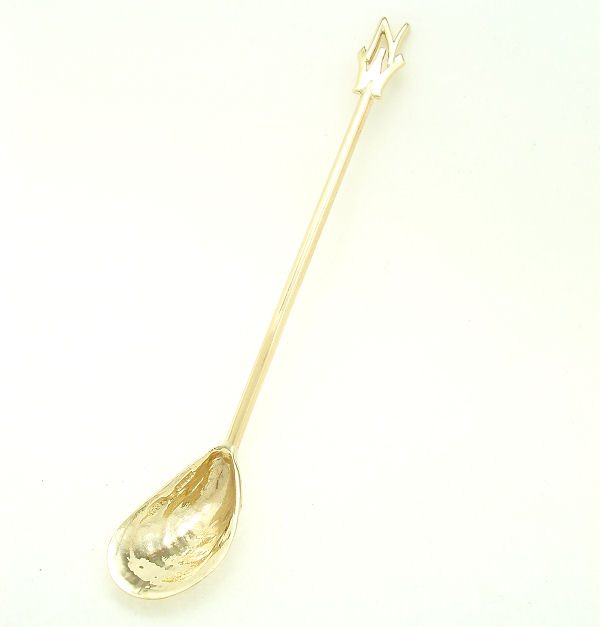 golden (adjective) -made of gold

So, what should we prefer while referring to a spoon made of gold?

word-choice nouns adjectives
Share
Improve this question
asked May 22 '14 at 11:04

Idiomatically, if we are referring to the spoon made of gold with the emphasis on it being a high quality gold spoon, and not just a gold-colored spoon, we call it a "gold spoon". Similarly, when a buyer is interested in buying something made of gold, they want a gold spoon, a gold ring, a gold necklace, a gold watch, etc.

Note that "gold" is both a noun (the substance/element gold) and an adjective (the color gold). Nouns can "act like an adjective" to modify another noun; this is called a noun adjunct. So a "gold necklace" is "a necklace of gold (the metal)", and a "gold spoon" is a "spoon made of gold". See also attributive nouns.

But "gold" can also be an adjective for the color of gold! So how does one know if your "gold spoon" is a NOUN-spoon containing the element Au (gold) or just happens to be an ADJECTIVE-spoon, like a plastic gold spoon from a box of gold-colored utensils? That has to be resolved by context.

Golden is an adjective describing the color gold (golden hair), made of gold (a golden crown), or metaphorical qualities of gold, such as success or prosperity as in "golden opportunities" (See google definition). While gold can be used for similar connotations, golden is more deeply connected to its metaphorical connotations, and is used to "sound fancy" or metaphorical as above.

One might describe eating at a fancy feast "using a golden spoon encrusted with diamonds", which very well may be gold-plated or better. In this case, referring to it as a "gold spoon" would sound too objective and plain.

Gold is a noun. It mainly refers to a type of metal, but it can also refer to the color associated with that metal, and is occasionally used figuratively as well.

Like all nouns, gold can function attributively, modifying a following noun. When it does, it usually has the "metal" meaning, often specifying the material the following noun is made of (gold watch, gold chains, gold bullion, gold foil, gold coin, gold dust) although other semantic relationships are possible (gold mine, gold market, gold rush), and the color meaning is possible as well, especially when the head noun is associated with color (gold paint, gold color, gold crayon).

Golden is a derived adjective. The -en suffix attaches to a noun and forms an adjective, which generally means either "made of 〜" or "resembling 〜", often figuratively.

When used in the sense "made of gold", the noun is a more likely choice. Gold spoon is more common than golden spoon when referring to an actual physical spoon made of gold.

"Gold spoon" implies the spoon is (substantially) made of gold.

"Golden spoon" describes the spoons appearance, not what it is made of.

A gold spoon would normally be "golden" as well (unless given some unusual surface treatment), but given the many ways of faking the appearance, "golden spoon" has no implication about its actual substance.

Few people would regard a gold-plated spoon as a "gold spoon" though it certainly would be a "golden spoon".

Not the answer you're looking for? Browse other questions tagged word-choice nouns adjectives .

0
How to use "gold" as an adjective of colour

12
Does an uncountable noun take an article if it has an adjective before it?
2
'Committed', 'made' and 'did' a blunder/mistake?
6
"sometimes" is adjective or adverb
1
What is "made" here?
2
If both gold and golden refer to "made of gold", how do I choose?
2
By the homeless OR homelessess
1
reached the gold medal
4
Why is noun+adjective allowed?