Do we say “she is spinning or swinging her hair around”?

spin [intransitive, transitive] to turn round and round quickly; to make something do this

(+ adv./prep.) The plane was spinning out of control.

My head is spinning (= I feel as if my head is going round and I can't balance).

spin round/around The dancers spun round and round.

We placed our bets and the croupier spun the roulette wheel.

swing [intransitive, transitive] to move backwards or forwards or from side to side while hanging from a fixed point; to make something do this

His arms swung as he walked.

As he pushed her, she swung higher and higher (= while sitting on a swing).

swing from something A set of keys swung from her belt.

swing something He sat on the stool, swinging his legs.

Some women in developing countries often "spin or swing their hair around" after washing it to dry it off as shown in the picture. 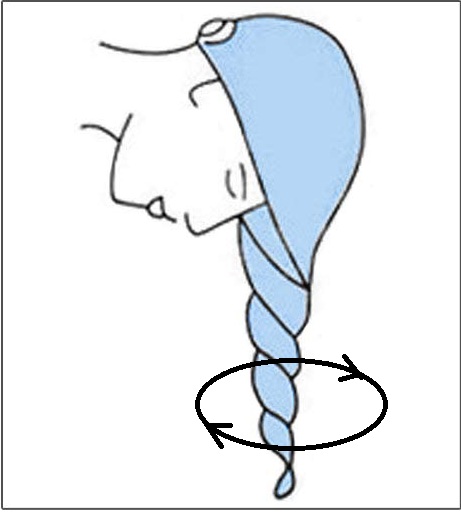 I am not sure if we say "she is spinning or swinging her hair around".

Also, I am not sure if people say "swing something around" because the "swing" movement doesn't go around but randomly back and forward or side to side.

You can potentially say either "spin" or "swing", but they do not mean the same thing:

"spinning around" generally means moving something quickly in a circle around a central point. It implies a certain amount of force or vigor, and usually also implies that the thing being spun is being forced outwards into a circular path. For example, the clothes in a washing machine on the "spin" cycle are spun around the center so that they are pushed up against the sides to press out excess water.

So regarding hair, if you were to say:

She is swinging her hair around

I would expect that her hair is hanging down, but it's also moving around horizontally. She may be making it go in a circular motion, or she may just be making it go "all over the place". It's not clear from just that statement.

On the other hand:

She is swinging her hair around her head

She is spinning her hair around her head

This says to me that she is actually moving so quickly that her hair is actually going straight out, horizontal to the ground, in a circle around her.

If I understand your question right, and assuming you're talking about moving all of one's hair around as a whole (not twisting it around itself), while bending over and it's hanging down, then probably the phrase you want is "swinging her hair around".

0
How to express these actions in English: She is hanging / swinging on the roof of the castle?
0
How to express this action in English “He waved his soaked hands at my face for fun”: He flicked the water from his soaked hands onto my face?
0
what are the differences between the verb: “flick” and “flip”?
0
Meaning of the verb “swing”, Can we swing while our feet are in contact with a surface?
0
Do we say “could you pick / pull my white hairs off, they make me itchy?”
1
What word best describes “to move your hand over a surface while pressing firmly”?
0
Is it ok to say “to tie your finger with a rubber band”, “to wrap a rubber band around your finger”?
2
Which is correct “The light string is tangled IN or ON the Teddy bear” and “The string A is tangled IN or WITH the string B”?
0
What are the differences between “to snap the handcuffs” and “to click the handcuffs”?