a name for a boy, boy's name, boy name

Which of the following phrases are grammatically correct, meaning "a name for a boy"?

Any response would be appreciated.

We commonly write "a boy's name". "Boy's" is a singular possessive. It is a name for one boy.

You could talk about "boys' names", plural. That is, names for many boys.

"A boys' name" is grammatically valid but almost never used in practice. "Boys'" is a plural possessive but "name" is singular, so you would be referring to one name used by many boys. That's certainly logically possible. There are many boys named "John", so we could say "John is a name used by many boys. John is a boys' name." But we just don't normally write this. We still say "boy's name". I suppose you could say we're thinking of one boy at a time. Even if they have a common name, we think of each boy as having his own "copy" of the name. It would be different if it was a single item that they really shared. Like "We have one gym for boys and another gym for girls. This is the boys' gym."

"Boy name" is often used in informal speech, but not in formal speech or writing. One could argue that it is valid: using a noun as an adjective, like "car part". But we just don't do that.

"Boys name" is thus doubly a problem. There's the singular vs plural problem that I discussed with "boys' name", plus the noun vs adjective problem.

Perfectly grammatical and idiomatic. Refers to the name of a specific boy or a name that could be used for a boy.

Perfectly grammatical and idiomatic. Refers to a name that is commonly used for boys.

This is probably the most controversial of the list. In my experience, "boy" is not uncommonly used as an adjective, e.g. "boy toy". So I would say this is fine but informal and not as common as "a boy's name". Google's Ngrams shows it as about 1/10th as common

Grammatically incorrect and non-idiomatic. "Boys" is a plural noun. 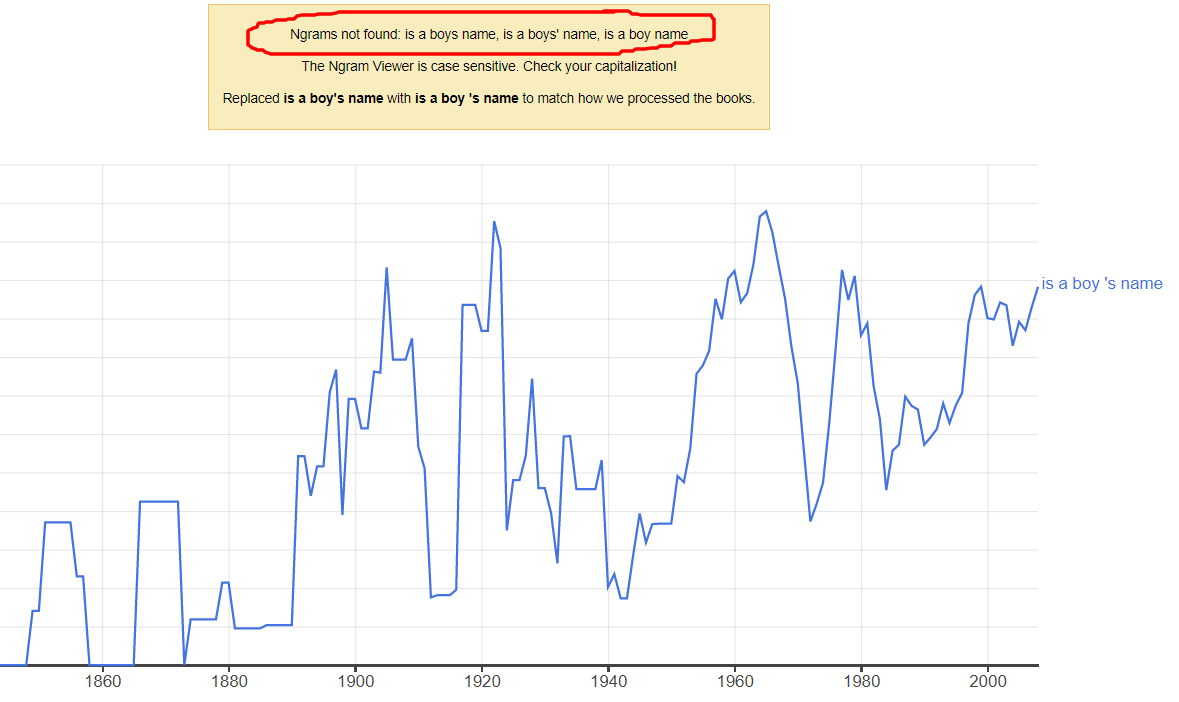 Note that in this specific case, the difference is purely one of orthography for the boys, boy's, boys' choices (not reflected in real spoken language), so you shouldn't be surprised if you sometimes encounter incorrectly written forms.

But all native speakers know perfectly well that no-one ever says X is a men name (and a man name is extremely unlikely). And since there's no such word as mans in English, that leaves X is a man's name as the only credible orthography - then it's easy to apply the same principle to X is a boy's name.

They're not really sentences: they're phrases.

1) is the only correct one:

Is Sixtus a boy's name?

But we also say a name for a boy (as you did in your question) in certain contexts:

Naming girls is easy, but it's difficult to think of a name for a boy.

Boys' names like Peter and Matthew are found in the Bible.

A boy name is not idiomatic.

Not the answer you're looking for? Browse other questions tagged grammar possessives .

0
usage of "name" as transitive verb
4
The name of the boy vs.The boy's name
1
"a company which name is" or "there is a company whose name is"?
0
Whose name vs. The name of whom
0
What's the subtle difference in meaning between "of", " 's" and compound nouns?
1
Files' types vs Files types
0
A wrong sentence
0
Grammar: sentence structure with possessive
0
What is the difference between using these two structures (Noun + noun or ('s + noun) )?