The meaning of "next over" in "In the next room over"

"In the next room over, another young woman was lying face down in her own blood."

When searching for similar sentences, it is a good idea to first try the exact phrase you're looking for, without modifying it. If I do a Google search for "next room over" (instead of "next over"), it comes up with quite a number of examples. The problem is that you modified the phrase in a way that changes it into something people don't say.

In this case, "over" is added to emphasize that something is physically neighboring or right next to something else. "next room" could mean the next room in a sequence, etc (for example, if people were going from room to room, the "next room" might be the next one that they go to, even if that's not physically right next door), but "next room over" strongly implies that the room in question is physically side-by-side with the current one (probably sharing a wall).

This use of "over" with "next" doesn't just apply to rooms. It can also be used with all kinds of other things to imply the same thing (that they're physically side-by-side), but it's always in the form "next (noun) over", never "next over".

Next room over means

In the floors of many hotels, you can consider the elevator the "starting point" and then go down hallways. While some hotels have connected halls that lead back to the elevator, others simply go to an exit stair or dead end.

Also in many hotels, the doors to two rooms are next to each other, then a distance or barrier separates them to the next set of two doors.

So by saying "next room over" we usually mean: 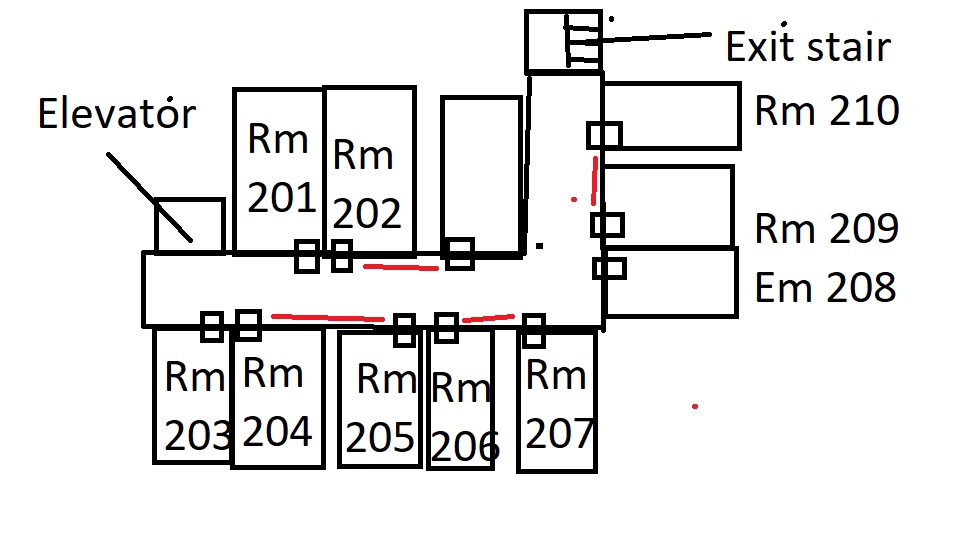 The red lins show where you might use "over" to qualify which room you mean.

2
Meaning of "over to the side" in a skateboarding manual
1
The meaning of 'earrings that announced their names thrice over'
1
Next to something in size (phrase meaning) in the sentence
0
The meaning of the phrase 'send over to someone'
1
"To take over" meaning in context
1
"the corner of his next speech" meaning in this context?
0
What is the meaning of 'be over'?
12
"Roll Over" in the Song Roll Over Beethoven