In one of my posts ("that's a very good one to know" vs. "that's good to know"), a kind contributor says

"That's a good one" is a stock phrase

I've seen this term (would I call it a term?) "stock phrase" a few times though, I still don't know what does it mean. So, I searched a bit and got this explanation

A phrase frequently or habitually used by a person or group, and thus associated with them.

When read this words, first phrase shows up in my mind is "Obama (Yes We Can)".

Similarly, "That's a good one" is associated with a specific group when it means some appreciation of jokes.

Is my understand right? Could someone please give a hint? Thanks in advance.

A stock phrase or expression is one which is so usual and typical, and used so many times, that it is no longer original. Another word with the same meaning is cliché. Stock phrases or expressions are tired, worn out, and avoided by writers aspiring to be original: "Last but not least", "Be that as it may", "In a nutshell" and "it is crystal clear that" are examples.

A stock phrase is a standard answer which might not tell the real truth, such as

The boss is in a meeting.

I was stuck in traffic.

I had to stay late at the office.

Whereas as a catchphrase is more usually associated with a person or a show:

Here it is, your moment of Zen.

and so on. So I don't think the Wiktionary definition is entirely correct.

I believe the person who said that was actually confusing "stock phrase" with "set phrase" (or "fixed expression").

A "stock phrase" is, as your link suggested, some phrase that has come to be commonly used or associated with some particular person or group of people. The term is also sometimes also used to mean "a standard response" or "the default way to say something".

On the other hand, I suspect what was actually meant in this case was a "set phrase", which means a particular combination of words that has come to be used frequently in that specific order, as a common way of saying a particular thing.

Some set phrases have actually come to have a meaning of their own, different from their actual literal meaning (for example, "red herring"). Other set phrases mean pretty much the same thing that their literal words mean, but they are used often enough that either they seem less strange than they would normally, or other options sound more strange than they would be normally, just because that one phrase is used so commonly.

According to Improving Your Technical Writing Skills (PDF), stock phrases are something like the following: 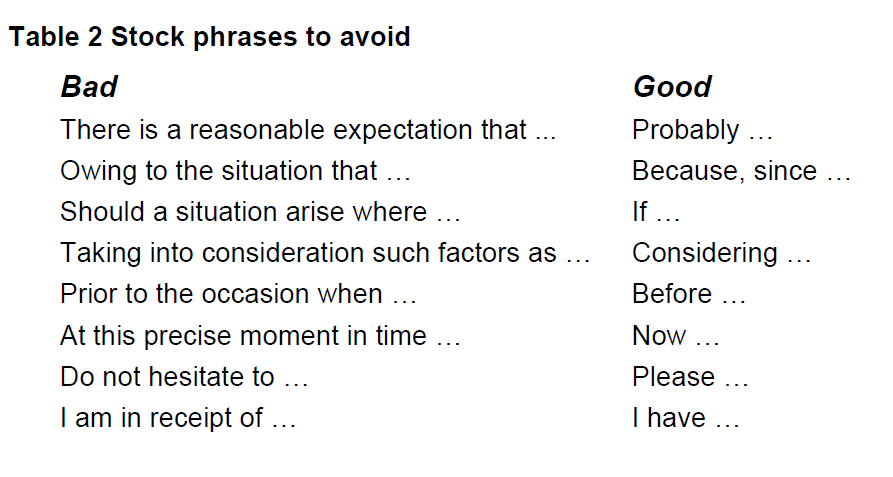 I have no time to retype right now so I just post the screenshot. I know it is not good for search engine and screen readers (for visually-imparted persons). Feel free to edit.