Considering the consensus of the world's leading meteorologists that there will be a vastly greater number of natural calamities (such as hurricanes and floods) during the first several decades of the twenty-first century, some experts recommended that more developing countries should do what Bangladesh has done--build into their development plans strategies to _______ the impact of such disasters on development.

a. ameliorate b. attenuate c. comprehend

Hi experts! The answer to the blank is given ameliorate in book https://www.amazon.com/Barrons-GRE-Verbal-Workbook-2nd/dp/143800379X

I have heard many times phrases like to minimize impact, to soften impact etc. So, thought the answer should be to attenuate the impact.

Can you please explain why doesn't the word attenuate work here?

See this NGram showing which words are most likely to occur in OP's context... 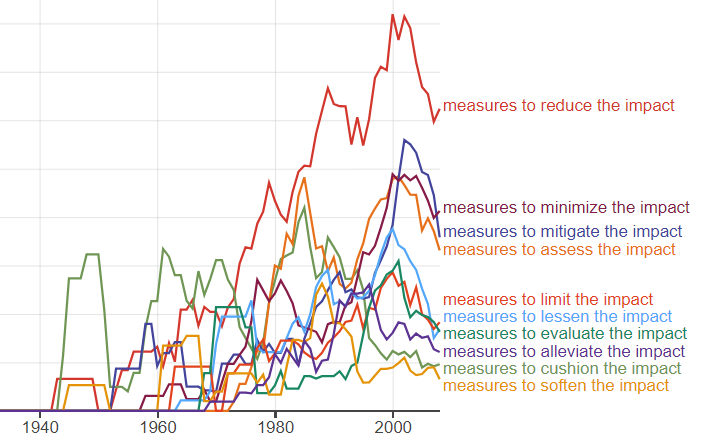 I wouldn't use attenuate here myself, and it doesn't appear in that "Top Ten" list.

BUT - nor do ameliorate or comprehend. And they're a curious pair of alternatives, given that so far as I'm concerned attenuate and ameliorate are just two "equally sub-optimal" choices, whereas comprehend simply makes no sense whatsoever.

Anyone who chooses comprehend is unquestionably wrong, but I see no good reason for preferring ameliorate over attenuate or vice-versa (those are links to many written instances of both terms). In short, the "test" is poorly-devised, so don't spend too much time analysing it.

4
Differences and similarities between "catastrophe" and "disaster"
0
What does "subsonic Fluger impact delivery dart" mean?
1
Making illegal any activity
0
It is commonly believed that
1
Parlance or discourse
0
Much of an impact
0
What does "household disaster" mean?
0
The meaning of "when disaster seemed positive" in Fahrenheit 451
1
"Affect" / "Impact" / "Influence"