How do you describe this situation? Does "overlapping" mean exactly the same as "coinciding"?

Consider you have two lines are very close to each other, but they are not as if one line is 100 percent exactly on the other line. In other words, suppose that we have picture and if zoom in and zoom out on the graph, we would have something like below: 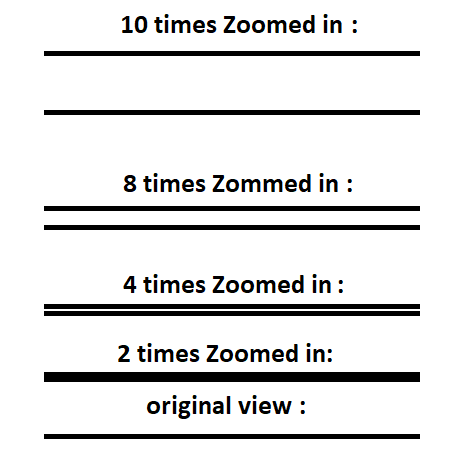 Now my question is which phrase should be used to describe this two lines the best if we are in the zoom-out perspective as well as when we are in the two-times-zoomed-in perspective. I've only come up with

However, in reality we know they are not 100 percent overlapping. They just happen to be two parallel lines that are very close to each other.

word-usage difference phrase-request
Share
Improve this question
edited May 19, 2020 at 0:44

Going more directly for the meanings of the two words "overlap" and "coincide", without geometric niceties, two things that overlap coincide for part, but not all, of their extent in a particular dimension. For example, physical objects can't quite coincide, but if one lies on top of another, and doesn't cover it completely, it can be said to overlap it.

For the particular situation you describe above, when the line segments are visible, they don't coincide. When the separation is not visible, they could be said to coincide. But the description would depend on context and what you are trying to say.

An example of overlapping could be represented by these line segments (seen from the top).

A practical example of overlapping things are roof shingles or tiles. The waterproofing depends on the shingles partially coinciding (in some dimension), and thus forming an overlap.

Not the answer you're looking for? Browse other questions tagged word-usage difference phrase-request .

3
Keeping a loose touch with someone / a group of people
0
Scale or Scaling of a vertical axis?
0
Choosing the item located at the bottom
0
Do we say "line" or "lines"?
0
is it idiomatic to say "turn the chair to face the outside" in this situation?