Trend of or trend for in the academic graph

I want to write an introduction about this graph: 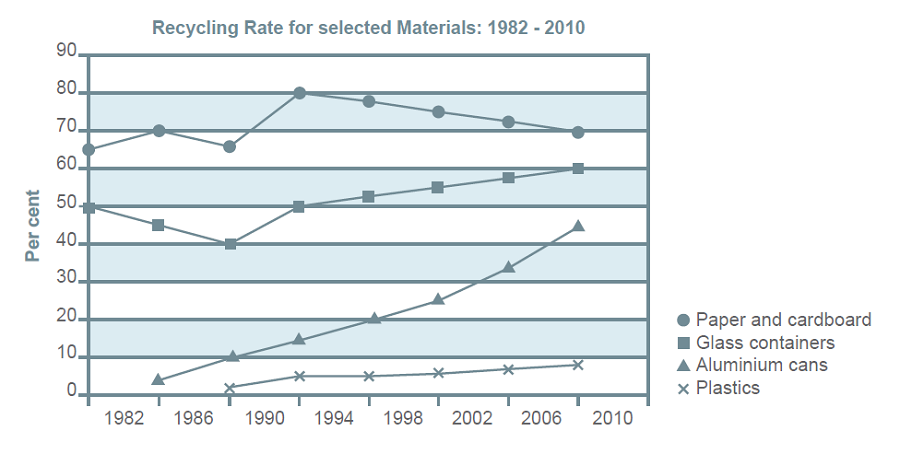 Are these sentences correct and have a good structure ?

“The graph gives information about the percentage of recycling trends of four different types of materials (paper and cardboard, glass containers, aluminum cans and plastics) over 28 years between 1982 and 2010.”

I am a little bit confused about the use of “trends”

prepositions sentence-construction academic-writing
Share
Improve this question
edited May 22 '20 at 23:06
Question
asked May 21 '20 at 3:21

There are still exceptions, such as "pants" is often used as a singular noun, derived from the phrase "a pair of pants", due to "pants" being used as a shortened form of "pantaloons", which were (originally, as that term has been used to describe various garments over the centuries) a sleeve-like garment that covered a single leg and were worn in pairs.

Not the answer you're looking for? Browse other questions tagged prepositions sentence-construction academic-writing or ask your own question.

2
In the given graph VS In the graph given
1
“represent … by” expression to describe a graph axis
1
graph description
0
Can I express a trend like this?
1
possessive apostrophe and THE for academic phrases
1
Which title would be the most acceptable in doing a literature review for an academic research?
0
Leave application for “days in the past” and “future”
0
How to translate Brazil's academic degrees in the USA classification?
0
Correct way to describe your academic degree
0
When can I omit “and” without making it look like all the information has been given?