“She is floating in (OR) on the water” when two-thirds of her body is below the water surface? 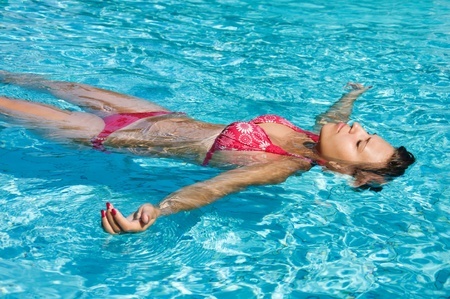 The dictionaries say "There was something floating in the river." (source) and

"The boat floated on the calm sea." (source)

"In" is fine in this context, "on" would tend to suggest that the object is mostly out of the water. But you could hear "on" being used in similar situations too. There is a lot of fuzziness, and both "in" or "on" are quite acceptable in many situations.

It would be more likely to say "floating in the pool" rather than "in the water", as "water" is assumed. In this case "in" is more likely, unless you specify "surface" as in "there was a stick floating on the surface of the pool".

As opposed to doing the crawl or doing the breaststroke.

John: Where's Jean? Is she in the pool?
Mary: No, look, she's down there floating in the sea.
John: Yes, she loves to float, rather than actually swim.
Yesterday, we went down to the river. And there she was! Floating in the river.

In reference to people in swimming pools (or ocean or rivers or lakes) in terms of swimming:

Learn to float, floating, the skill, staying afloat, and by the way, she shows you how to float face down, too!:

Not the answer you're looking for? Browse other questions tagged word-usage word-choice word-request phrase-usage phrase-request or ask your own question.

2
dives into the water
3
“Don't take my water, it is …” after touching the bottle with my mouth when I'm ill
7
What's the name of the game of throwing stones to the surface of water?
0
Can we use “every inch of” with time, materials, substances, liquids and everything else
2
Do we say “She fell on her head”, “She fell with her head onto the floor”, “She fell and hit her head onto the floor”, “She dived into the floor”?
0
How to express this action in English “He waved his soaked hands at my face for fun”: He flicked the water from his soaked hands onto my face?
0
Are they the same “She is drying her hair off” and “She is drying her hair up”?
1
Do we say “he is swimming in / on the river / sea”?
1
Is San Francisco near the “**sea**” or the “**ocean**”?
0
Do we have the structure “to copy somebody doing something”?