Your chances of/at getting a place at the college are high.

I would have thought that the use of the preposition at was incorrect there, but Rachel used it instead of of in the 14th episode of the 6th season of Friends. Here it is:

Rachel: All right, all right, well you just blew your chances at dating Bob!

Is it standard in America to use at with chances?

It's more often singular chance rather than chances, but by far the most common preposition is of winning - with what I assume is a "continuous participle" verb form (but maybe it's a "gerund", I've never found that distinction particularly clear or useful myself).

The next most common form is to win, which I assume is a preposition use, followed by an "unmarked infinitive" verb form. The preposition at comes in a distant third in this NGram usage chart... 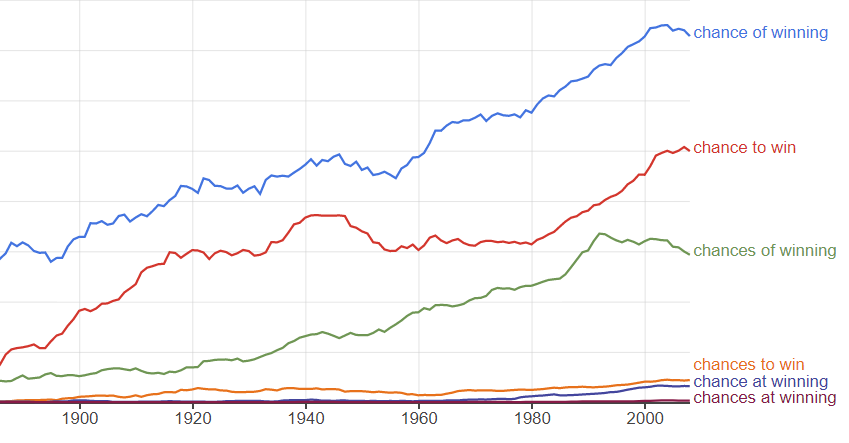 If you follow my link to that chart, you can toggle between AmE and BrE corpuses for more detail, but I don't think there's any significant difference between them. Feasibly Americans are slightly less likely than Brits to use the plural chances, but learners should probably just stick with the singular anyway, since it's far more common everywhere.

The main point to note is that the preposition is essentially a stylistic choice, primarily affected by the (again, stylistic) choice of verb form. That choice doesn't reflect any difference in meaning.

13
The sentence is talking about "a candidate" and "an election", why does it use the plural form "chances"?
1
Why do we use the plural "chances" and "odds" to talk about probability?