Is there anything wrong with this question? “What mark have you got for your English?”

Is there anything wrong with this question?

"What grade/mark have you got for your English?" And the answer: "I've got an A".

I would like to know a none American point of view as well because, as far as I know, the constructions with "have got" are more popular in other kinds of English.

Here's two almost identical stories found in one old Soviet textbook. An earlier and a later editions respectively. A small remark: kids in Russia receive their grades ranging from 2 to 5. 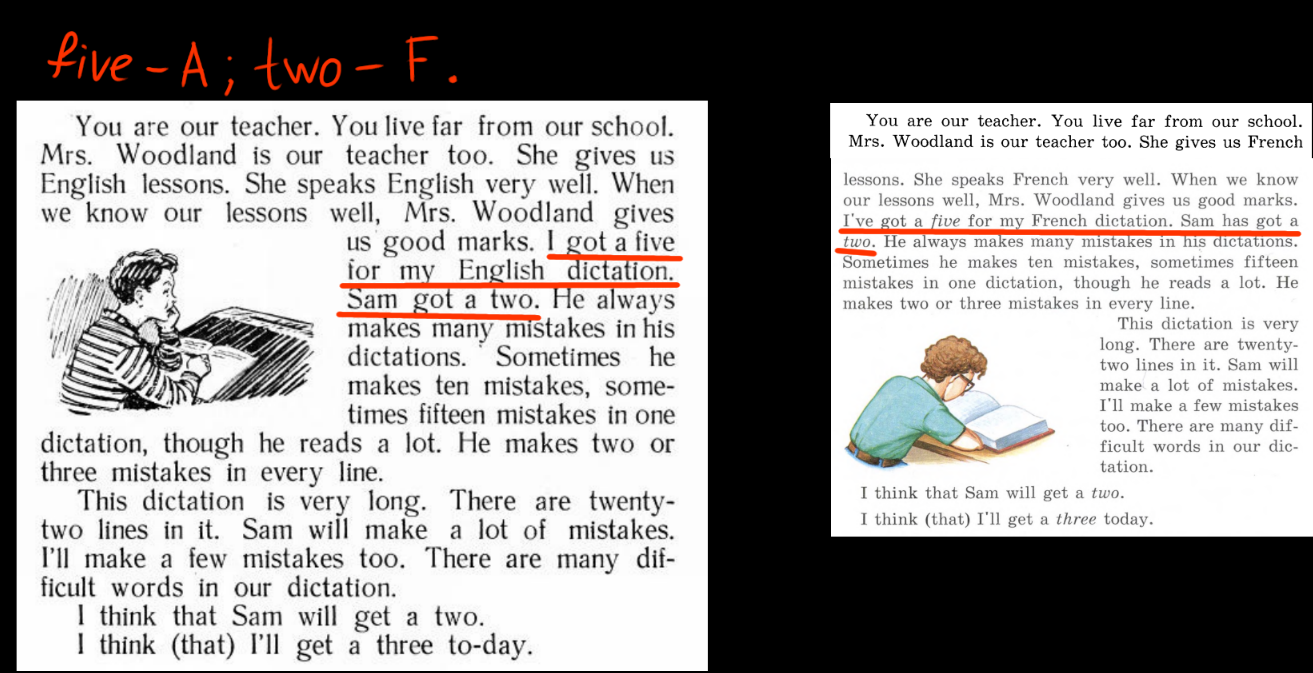 Following this text there are phrases related to it and one of them is "What mark have you got for your English? I've got a four"

Neither your question nor answer are idiomatic in US English. More likely are

What grade did you get in English?

What grade do you have in English?

A natural answer to the second question is

Notice that "in" is more idiomatic for a course and "on" for a test than "for."

Warning: This question in basic vocabulary and usage is exactly where British and American English are likely to have minor differences. For example, "mark" seems to be more common in the U.K. whereas "grade" is more common in the U.S. My answer may need to be supplemented by someone whose native version of English is not American.

Following from points raised by the OP in comments here is a specifically British perspective.

Scenario 1. Young people gather outside the place of their education in the summer to receive the results of the public examinations and open the envelopes containing them. They might ask:

This is because these examination results are on a letter scale from A-G or a short numerical scale 1-9 or similar. I would have thought the forms omitting the word grade would be more common and the did form more common than the have you got form.

Here in a slightly more formal setting I would expect the interviewer to use grade. The forms with have got would be wrong here as it happened a long time ago.

Scenario 3. An internal examination with marks on a scale from 0-100. Here we would use mark instead of grade.

The second seems more formal and the first, although technically ambiguous, would be more usual.

Scenario 5. An examination with some other system. Perhaps the most common of these is the examinations of the Associated Boards of the Royal Schools of Music which assess musical ability. Students get either Pass, Merit or Distinction. Here a complication is that the examinations can be taken at different grades from 1 (easiest) to 8 (hardest) so you would just ask

Note that I use the dialect common in south east England. I believe the same to be true for the UK in general but note that the Scottish educational system is different.

To the OP: thanks for providing an image of the textbooks in question; it helps make things clearer. As others have pointed out, the use of the word "mark" instead of "grade" implies British English. As an American, I can't really comment on idiomatic British (even though I am familiar with it). So what follows applies to American English.

To me, the different wordings imply slightly different things. Because the wording on the left ("I got a five") is past tense, it implies the student received a grade (or mark) of 5 on an English dictation assignment, although the idiomatic American expression would be "I got a 5 on [an assignment or test]" or "I got a 5 in [a class or subject]", rather than "I got a 5 for [something]". Either way, the implication is that the assignment has been graded and the student's grade was 5.

The wording on the right ("I've got a five") is equivalent to present tense ("I have a five"), so the way I would interpret that is:

To complicate matters a bit, the subsequent paragraph implies that there are also dictation assignments as well as a dictation subject area. So the sentence "I think that Sam will get a two" refers to a specific assignment, rather than the subject area.

However, any native speaker would look at the sentence structure and conclude that this is an elementary textbook, and that such subtleties are probably not intentional and one should not read too much into it.

2
Have got in BrE

1
How to parse this sentence. What kind of clause of “that you would ask him to pull your beard.”?
1
When you are going to show your respect and tell somebody that meeting with them has been an honor for you
0
What is the proper construction of this question - “…for who are we” or “…for who we are”?
0
Something wrong in “What will this course help you to?”
0
'Do you have anything needed?' Is this sentence incorrect?
0
What does this Facebook comment mean: “As a top fan, I don't really have anything to say.”
1
'Do you want to see it!' - Which type of sentence is this? Why exclamation mark at the end of a question?