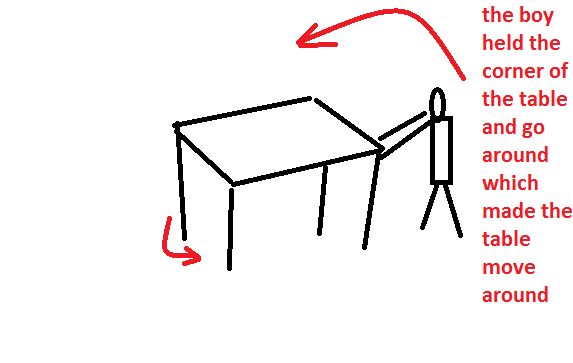 The boy is holding the corner of the table as shown in the above picture.

As others have said:

the boy is turning the table around

You would probably think that he is turning it just one full rotation or less. "around" is not needed and putting it just once suggests 180 or 360 degrees.

the boy is spinning the table around

"spinning" suggests many rotations, but also some speed or freedom of motion. Again, "around" is not needed or could suggest one full or half turn.

"Spinning around and around" would be saying the same thing twice.

"Spinning" sounds more natural and is less likely to be ambiguous in this case. A person spinning a table is almost certainly doing it on the vertical axis as in your picture, and could be spinning it around and around multiple times. If you say someone is turning a table around I would normally imagine them only turning it around once, so that it faces the other way. It's also a bit too close to overturning a table, which would be to tip it up on its end.