Too much and very much

What is the difference between too much and very much.

On seeing the lion she felt too much afraid.

On seeing the lion she felt very much afraid.

According to OALD meaning of too is very

So are two of the sentences given above correct?

Kshitij. There is a lot to unpack here.

First, too: Normally too has a different meaning from very: it is saying that something is in excess. Too afraid (see below) means not just very afraid but more afraid than she should be; afraid to a degree that is wrong or bad in some way.

Secondly, normally we qualify adjectives with very or too, not with very/too much. Very/too much is normally used to quantify nouns, with a literal quantity ("There's too much food here!")

Very much can in some circumstances be used with an adjective, but it is unusual, and it usually carries a special, subjective meaning: it implies that somebody has an emotional involvement with what they are saying. Probably for that reason, it is much more likely to be used in a first person statement than other subjects (see the screenshot below, from the iWeb corpus)

Too much is hardly ever used before an adjective, except in a negative context (see below).

So the short answer to your question is that

On seeing the lion she felt too much afraid.

is not idiomatic. If you remove the much, it will be, but only makes sense if there is some context which clarifies why her degree of fear is wrong, or bad.

On seeing the lion she felt very much afraid.

is possible, but unusual unless the speaker is trying to convey something extra about the emotional significance of her fear. Much more usual would be omitting the much.

There is a use of too to mean just very in a certain kind of "gushing" speech eg "Oh, that is just too kind of you!" but I advise you not to use this.

Very much is used before comparative adjectives: "That pile is very much bigger than yesterday". Very is not used on its own in this context. This implies that very much more is grammatical, and indeed it is common.

Neither too nor too much is used in this context: You can say "that pile is too big", but "*That pile is too [much] bigger" is ungrammatical, or barely grammatical, and you would need to paraphrase. It can be used sometimes in negative contexts ("I hope that pile doesn't get too much bigger!") 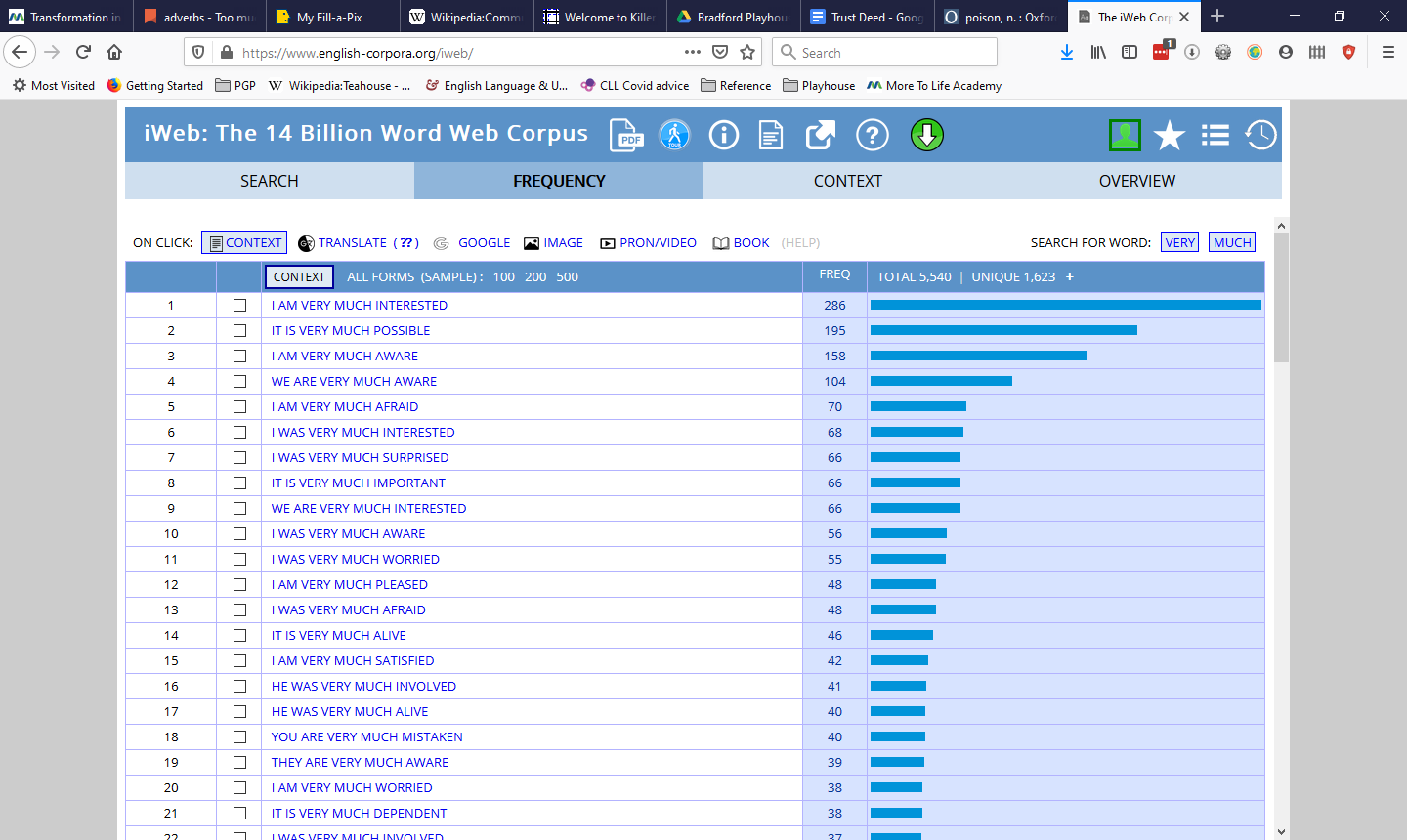 Too and very are not the same.

"Too" means "in excess". More than what was wanted or good.

"He drove too fast" means that he drove faster than was good for him (e.g., dangerously or illegally).

"Very" just amplifies the meaning of the adjective or adverb.

"He drove very fast" just means faster than fast, but not necessarily good or bad.

To say "too much afraid" (which is not good English in my opinion) implies that the level of fear was so high that it was somehow negative. To be honest, the sentence doesn't make a lot of sense in the context.

The word "much" in these particular sentences is optional and doesn't add a lot to the meaning. It is like "very" but perhaps a bit softer. "Much" is normally used without (and in place of) a following adjective or adverb, for example:

"She ate much" (meaning she ate a lot)

"She ate too much" (meaning she ate more than was good for her).

Not the answer you're looking for? Browse other questions tagged adverbs or ask your own question.

1
Difference between too much/very much
6
Are there places where we can't use 'much', but 'very much' is OK?
1
Too deep or too deeply
1
“not very much” vs. “a little”
2
“She very wants to do it” instead of “She wants to do it very much”
2
Meaning of too in the following sentence
0
Usage Too, As well and Also in negative sentences
1
no one and no one else differences