Can you please tell me the meaning of highlighted part given down below?

I tried searching the meaning but I couldn't make sense out of it.

In 42 attempts Ronaldo had never managed to score a free-kick for the Italian side, a run of misfortune that has had little effect on his otherwise excellent numbers - Saturday saw him reach 25 Serie A goals for the season - but gnawed away at the notorious perfectionist as each effort went awry. 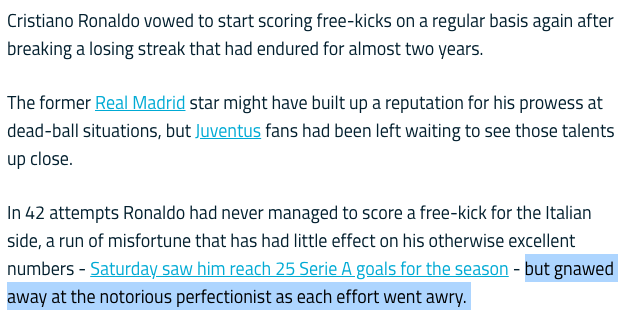 Let's break it down, leaving out the middle section:

"..a run of misfortune that has had little effect on his otherwise excellent numbers, but gnawed away at the notorious perfectionist as each effort went awry."

"gnawed away at" - literally means "chewed at", but here it means that the misfortune "caused Ronaldo mental pain"

"notorious perfectionist" - means Ronaldo is well known for seeking perfection in everything he does.

"each effort went awry" - means each attempt at a goal failed. "went awry" means that events did not go according to plan.

So reworded: the series of missed free kicks did not have much effect on Ronaldo's excellent goal record, "but caused mental angst for Ronaldo, who is well known to seek perfection, as each attempt at scoring a free kick went poorly"