Today I discovered the word "scurry" and I immediately found that I couldn't tell it apart with "scary". I looked it up and found that it boils down to differentiating /╔Ø/ and /╔ø/, at least according to these Wiktionary entries:

They seem to sound the same to me at this point. How could I learn to tell the difference? One idea that comes to my head is to look for words that only differ by this sound, but I'm not sure how to start looking.

/╔£/, /╔ø/ and /╔Ø/ are significantly different vowels. /╔£/ and /╔Ø/ are virtually the same vowel sound; both are central, the only notable difference is that the latter is being influenced by a following [╔╣]. /╔ø/ is a front vowel i.e. the highest point of the tongue is positioned relatively in front in the mouth.

Vowels vary enormously from speaker to speaker. Also, different dictionaries use different systems to represent pronunciation; some use IPA, some use other systems.

Here's the vowel chart to begin with: 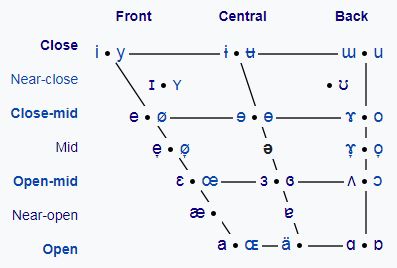 How this chart (vowel quadrilateral) works is explained in detail by Patricia Ashby in Understanding Phonetics:

What the four-sided (ŌĆśquadrilateralŌĆÖ) figure shows us is a schematization of two dimensions of tongue movement, demarcating the boundaries of the vowel articulatory space within the oral cavity. The slanted left-hand line marks vertical displacement of the front of the tongue, showing us different degrees of open approximation. The top line, which we call close (as in ŌĆśnear toŌĆÖ), represents a position just wider than the degree of stricture required to generate friction. The jaw aperture is narrow and to reach this height, close, the front of the tongue is bunched up in the sort of position that also associates with the approximant consonant [j] (much like the sound at the beginning of English yet).


In a nutshell, there are two main types of vowels based on the openness of the mouth:

The horizontal lines represent another feature of vowels called 'vowel backness'. It means whether the highest part of the tongue is positioned in the front or the back of the mouth. The same book (Understanding Phonetics) says that: "Vowels are made well back in the vocal tract, using only the body of the tongue ŌĆō the front, centre and back. In terms of place of articulation, therefore, they are located between palatal and velar" (p84). On the basis of backness, vowels are primarily divided into three main categories:


There's another feature called vowel roundedness which means whether or not the lips are rounded during vowel production. In the chart, some vowels occur in pairs such as [i, y], [╔©, ╩ē], [╔ø, ┼ō] etc., the ones to the right side are rounded whereas those to the left side are unrounded.

Here are some transcriptions for scary from dictionaries that use IPA:

it can either be pronounced with a long vowel /╔ø╦É/ or a short one /╔ø/ (the only difference is 'vowel length', not 'vowel quality'), or even with a diphthong /╔ø╔Ö/ (it involves a change of position of the tongue i.e. from /╔ø/ to /╔Ö/). /╔ø/ is called open-mid, front, unrounded vowel: it's a front and unrounded vowel. In articulating [╔ø], the tongue is positioned one-third of the way from an open vowel [a] to a close vowel [i].


Scurry, on the other hand, can be pronounced with /╩ī/, /╔£/ or /╔Ø/, depending on the variety of English:


Here's a clear illustration of both from A course in phonetics by Ladefoged and Johnson: 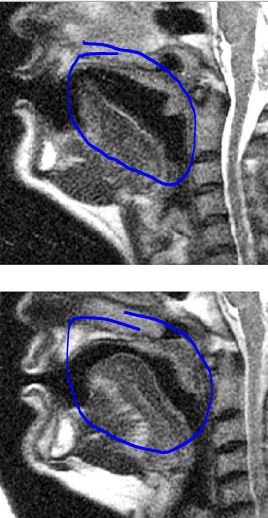 [the encircling is not a part of the original illustration, it's mine]

A minimal pairs exercise might be helpful in learning to both hear the difference and then to produce it in your own speech. Listen to pronunciation of both words in each pair and try to hear the difference: fur/fair blur/blare purr/pair burr/bear her/hair lure/lair were/wear

Not the answer you're looking for? Browse other questions tagged pronunciation vowels .

5
Is there any difference in pronunciation of 'wore' and 'were'?
2
Is 'idea of' pronounced 'idearof'?
2
How can I ensure that my pronunciation of [╔ø] and [e] is correct in spoken English?
1
Transcribing Burj Al Arab
1
why does American ─░PA have less diphthongs compared to British?
0
What's the difference between /╔£/ and /╔Ö/?