What does “everything is going through me like crap through a tinhorn” mean?

It's from the 8th episode of the 2nd season of Breaking Bad. Here is the context:

Walt: So, how are you doing?

Hank: You know, lousy. Montezuma's revenge big time. Everything is going through me like crap through a tinhorn. You better not get close.

Montezuma's revenge is a mainly US jocular name for a form of diarrhoea (UK spelling, US diarrhea), caused by eating food which has been prepared unhygienically. Sometimes called 'traveller's diarrhoea'. Montezuma was an Aztec emperor killed during the Spanish conquest of Mexico. It is jokingly said that his 'revenge' for that is the sickness sometimes suffered by US visitors to Mexico, or people who eat poorly prepared food anywhere. Also called 'Delhi belly' or 'Gippy (Egyptian) tummy' by British people. It can sometimes be experienced by people unused to strongly spiced food.

A 'tin horn' (two-word phrase) is a type of metal funnel used in a 19th century gambling game called 'chuck-a-luck'. It involves throwing three dice into a horn or funnel, so that they fall through. 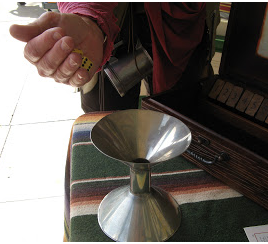 Liquids pass easily and quickly through a tin horn. The phrase 'water through a tin horn' can be found as early as 1897 in sports journalism, used to describe a runner easily penetrating the defence of the opposing team and scoring a touchdown. The phrase is sometimes hyphenated ('tin-horn'). Using 'crap' (faeces/feces) (clearly in liquid form) is appropriate given the circumstances, and as a vulgar intensifier.

A 'tinhorn' (one word) means something different, and its appearance may be a transcription error.