I have got some issues with comma usage. There are plenty of punctuation rules when it comes to participles. For exmaple:

I need to use commas:

Those exmaples are quite straightforward to me. However, yesterday, I wrote a graph description, using as much participle phrases as possible, and I was a little bit confused. Here are a few exmaples with "my" punctuation:

Here is the map I described: 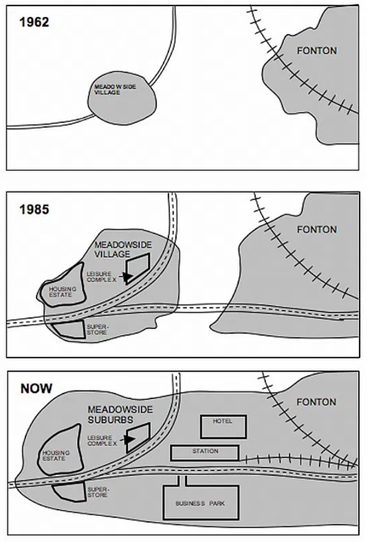 I guess that I am struggling with this rule: "If a participial phrase is required for the reader to understand the meaning of the sentence, then no commas should be used". I am not sure whether these participle phrases are essential for understanding the meaning.

Your first example does not need commas. There are only two clauses (albeit quite long ones) and these are separated by an "and":

Your second example is correct too. There are three clauses, and you have already inserted a comma after the first clause (the fact it was extended is unrelated to the direction it branches to). Another "and" separates the final clause:

The old road was extended, branching off to the east and connecting the village and Fonton.

Your third example has just one clause but includes a parenthetical statement. You can use commas for parenthesis. I don't think this requires the additional comma you suggested as it could read that a hotel and a station have been built, and this is one statement. You could put a comma where you suggest as most readers would naturally pause there, but personally I don't think it is required:

In the northern previously empty part, between Meadowside and Fonton, A hotel has been built, as well as a station connected to a new railway route running along the second road.

Not the answer you're looking for? Browse other questions tagged commas participles .

1
About present participle and past participle
1
Can participle phrases be sequential?
1
Relative adverbs and commas
0
Why are there no commas before some prepositional phrases and not others?
1
Comma with Participle Clause
0
Difference between adjectives and participle adjectives
0
Do I put commas in that's phrases?
1
participle phrase with a comma