Is this phrase okay to use to convey bathing with bucket and mug?

In India, most people use this kind of thing for bathing (Shower is for rich people and luxury. Not everyone can afford it here.). A bucket of water and a mug. 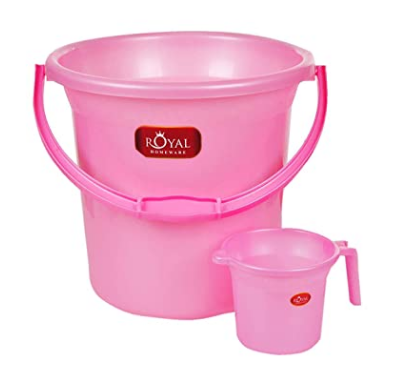 Now, I want to say that "Yesterday, at this time, I took a bath".

When I Googled about it and saw it in a dictionary, it showed me that take a bath means to suffer a financial loss.

So I'm confused whether I can use this phrase or I can rephrase like this:

"Yesterday, at this time, I had a bath".

Firstly, the use of "take a bath" as an idiom to mean 'take a financial loss' is not particularly common. I'm a native British English speaker, one who is deeply interested in language and literature, and had never heard it before! I looked it up and you are right, it is in the dictionary, but it is the fourteenth definition, so I wouldn't worry about people assuming that is the first thing you mean, especially when there is no context to even suggest it.

Secondly, "take a bath" is predominantly American English. In British English, we are far more likely to say "have a bath". The same applies to showers.

I have never seen a 'bucket and cup' like the one you linked to - they just aren't used in England, and I don't think they are known in the USA either, at least not by the majority of people. They may be used in some subcultures I'm not aware of. There are some different ways people may have a 'bath', for example, a bed bath is an all-over wash given to a hospital patient without submerging them in a bathtub (in the USA, this is called a sponge bath). Still, if you said "I had/took a bath" to most BrEng and AmEng speakers they would assume you meant in a tub.

Other than the above, there is nothing wrong with your suggested sentence:

Yesterday, at this time, I had a bath.

You could also say:

This time yesterday, I had a bath.

Despite the idiom, "take a bath" still means "bathe one's self." Context usually makes it clear.

However, in your case, we would say "took a sponge bath" to differentiate from getting into a bathtub. This unequivocally uses the literal meaning and not the idiom, as well.

Not the answer you're looking for? Browse other questions tagged sentence-meaning verbs idioms phrases or ask your own question.

2
Is “round” a verb in this phrase?
1
Meaning of this phrase?
1
Can someone explain this phrase from Sense and Sensibility?
0
Clauses with “like” and “than”
1
Difference between 'prepositional phrase' and 'adjective phrase'?
1
Predicate and verb phrase identical?
0
Phrase request: Calculating with, counting with
0
Can I use the phrase “It just so happened that…”?
1
Usage of the phrase “give-and-take”
0
Is this a phrase?