There are many types of rings that people wear, some of them have no gem or stone studded in it. The ring with a gem is called 'gem-studded' if we emphasize on the presence of a gem in it, but what about the one which has no gem in it, like the one in the image?

Can we call it a 'gemless' ring?

Actually the culture I belong to, we have two different names for the two rings [one with gem, and the one without gem.] I need to make an adjective, so that I can use it in a noun phrase like this:

She usually wears a gem-studded ring, but today she is wearing a gemless ring.

Does it sound ok? Does it make the meaning clear that the focus is on the presence and absence of a gem in a ring? Although I know that in English it is simply 'a ring' whether it has a gem, or not 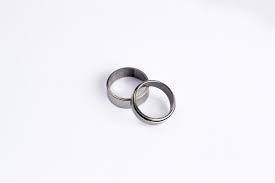 I looked at the web site of one the UK's high-street jewellers.

I see them use the terms "ring" and "band". This the differentiations being the cross-section: a ring having a rounded cross section and a band being flat. Both rings and bands seem to be plain or set with jewels. In some cases bands have intricate patterns fashioned into the metal, these are described as patterned

Find plain bands in yellow and white gold, through to more statement-making diamond and gemstone set rings for men.

So I don't think we have separate words for these items with and without gems, rather we use qualifying adjectives and descriptions.

It would be quite normal to simply use the specific gem as a qualifier:

He gave her a diamond ring.

1
Do these two have's the same meaning?
2
What does this 'fancy' mean?
0
What does “black men” mean here?
3
“Percy directed the girls through one door”: does Percy move along with the guided?
3
Which is his name: the Fat Friar, Fat Friar?
4
Types of Oranges?
1
would-be, to-be, in the making
2
difference between 'beneath' and 'under'
3
types of lakes depending on the origin
0
general questions version of “no such thing as”