I was writing an essay wherein I encountered the need of writing the description of a mirror. The mirror I want to describe is a normal mirror which isn't coloured, the simple one found at our home. So should I use the words "white glass" or "transparent glass" or some other alternative?

Specifically to mention, it is actually a piece of writing wherein I am developing a story plot of the story in a page's length. That part is include as part of the essay itself. So I was writing a fictional story, when I thought of describing a scene where there is a mention of a vintage mirror. I know that a "mirror" is a "mirror", which is very much understandable. But when you write a story, especially a fantasy fiction one at that, you usually tend to describe things in a classy and fictional way. Hence I wanted to include a description of the mirror in a rather explicit manner.

I wouldn't use "white glass"; just look it up on Google, that means something made of glass but with a white tint, and you can't see through that kind of glass.

The glass in a household mirror is transparent, but since all glass in those kind of mirrors is transparent, you don't need to mention it. In fact, they all contain glass, so even saying "glass mirror" would be a little redundant.

If you do feel the need of describing it, "clear glass" (thanks @MichaelHarvey), "transparent glass" and "colourless/colorless glass" (depending on whether you write British or American English) are technically correct and should be understandable. The first option is used most often:

A mirror is usually referred to as "silvered glass", since it was often made by depositing silver nitrate on one side, as the Wikipedia entry describes.

"White glass" would (to me) be more an antique glass called "milk glass", because it's milky white. "Transparent glass" is, well, a window.

A normal everyday mirror that isn't colored is just a "mirror". There's no need to specify that it DOESN'T have an unusual quality.

While "white glass" would mean translucent milky glass, and window glass could be called "clear glass", a "clear glass mirror" is a confusing contradiction in terms. A mirror isn't clear, it's a mirror.

I'm having a hard time understanding what kind of phrase you're building where you need to describe a mirror as something other than a mirror.

"Frosted glass" is the most common term normally used for glass with some opacity. Some glass manufacturers use other terms such as "obscure glass".

"Transparent glass" isn't a term I've ever heard. It sounds like a tautology - transparent glass is just glass! But if you were trying to differentiate between normal glass and frosted glass, you might say "clear glass".

Glass which acts as a mirror is called "mirror glass", or perhaps "mirrored glass". A "one-way mirror" is a pane of glass which is only reflective one-way. If you wanted to describe glass which had some mirror properties but still had some degree of transparency you might describe it as "reflective glass".

First of all, as others have observed, "white glass" is definitely wrong. That suggests glass that has been colored or painted white.

Really, the proper description probably depends on context. What other kinds of mirror is this mirror being contrasted with? Ordinarily, if you just say "a mirror", people assume you mean an ordinary mirror. If you have to be more clear, you might say "an ordinary mirror, like you would find at home."

Rereading your question, if this mirror is being contrasted with ones that are colored, I think the term "colorless" would work well. Perhaps "ordinary colorless mirror" just to emphasize that this is just like the ones people see every day.

'Transparent colorless glass in front of a silver reflective material.'

The term 'white glass' evokes thoughts of either milk glass or frosted glass, typically implying that the glass is question is neither colorless nor entirely transparent.

Combining 'transparent' with 'colorless' accurately describes the glass found in most mirrors that use a layer of glass to protect the reflective material, though in more modern mirrors it may be an acrylic or polycarbonate layer instead of glass (resulting in a less expensive mirror, but you have to be more careful about how you clean it)

The layer of reflective material behind the glass is best described in almost all house mirrors as 'silvery', which refers to a near colorless grey or white material with a very high reflectance. Traditionally this would have actually been a very thin layer of silver, though these days aluminum or a highly reflective polymer such as BoPET is much more common because it's a lot less expensive (and technically more reflective).

The mirror I want to describe is a normal mirror which isn't coloured, the simple one found at our home.

A plain [glass] mirror, unframed mirror or frameless mirror I suspect is what the OP is asking about. In all of the above, the mirror is flushed with the wall, so a frame is unnecessary. 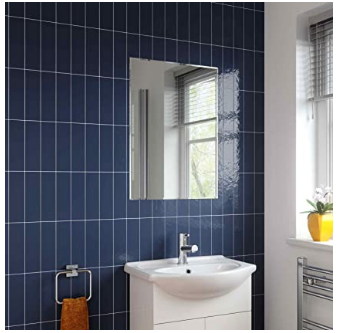 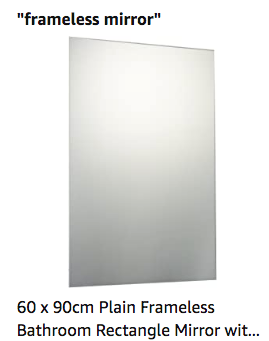 As mirrors age the silver at the back erodes and loses reflectiveness, which is referred to as clouding. So a mirror which is functioning perfectly could also be referred to as unclouded, if you are emphasising that it is producing a good reflection.

Not the answer you're looking for? Browse other questions tagged word-choice word-request writing or ask your own question.

5
A steel glass Vs. A glass glass!
4
Is it normal to describe someone as having white skin?
3
"Vietnamese girls like white skin" or "Vietnamese girls like white skins"?
1
The quantity of one fourth of a glass or a cup
14
A term for glass half wall
0
"White-side" meaning "from all flanks"?
0
What do you call a glass container containing a large artifact?
1
What is the term for the white foam of the wave apart from sea/ocean foam?
14
Word used to denote a glass of drunk water