What does "ham one's biscuits" mean?

I've come across the phrase in the second episode of the sixth season of the Walking Dead. Here is the context:

Eugene: It hams my biscuits is all.

And going by cubic feet, the biggest building in the expansion

and we're gonna waste it on a church.

Take out the benches, that could be a lab, a machine shop, very least a sweet-ass game room.

The expression is non-standard slang. The meaning is clearly, given the context, that Eugene is annoyed by the proposal to turn the building with the largest amount of space into a church instead of making better use of it by turning it into "a lab, a machine shop, very least a sweet-ass game room". It is very likely an expression invented by the Walking Dead scriptwriters. Compare "grinds my gears", "spins my wheels", etc. Such expressions may be invented on the spur of the moment and still be readily understood by native speakers, e.g. it porks my beans, slices my salami, etc. Vulgarity is often intended. The literal meaning is often irrelevant, and the intended meaning (anger, satisfaction, etc) may have to be deduced from context, tone of voice, and facial expression. "Ham and biscuits" is an American meal composed of sliced cooked ham and bread rolls, popular in the Southern states, and also, allegedly, vulgar Atlanta (Georgia) slang for the female pudenda. The series is made and (I believe) set in that state.

Picture of ham and biscuit: 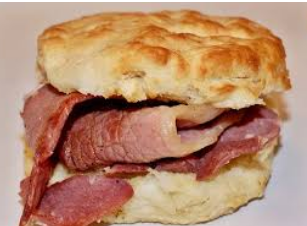 Not the answer you're looking for? Browse other questions tagged meaning american-english slang .