Is “Her hair is in a pigtail” (singular) used in British English? 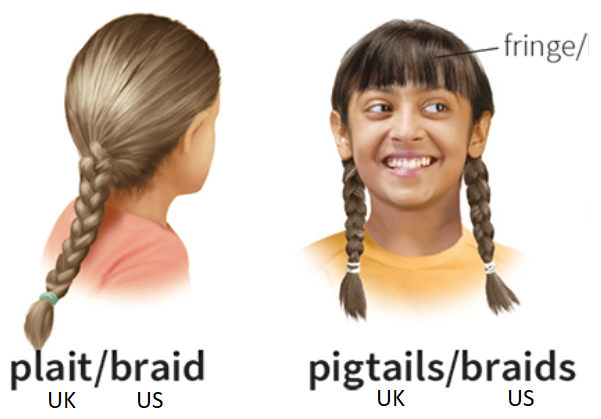 I love the word "pigtail" because it sounds very cute but I am not sure if it is OK to say "Her hair is in a pigtail" (No.1).

All the terms you mention are in use in British and American English, but the way they are used is a little different.

In British English, a "plait" is the braiding seen in your photographs. A single "plait" would be one at the back of the head, and "plaits" would normally be two, but could be any number. We do say "braids", but this tends to describe styles with many braids, similar to dreadlocks.

Without the braiding, we tend to use the term "ponytail" to describe a single bunch of hair at the back of the head. "Pigtails" (plural) is sometimes used to describe two as in your second picture, but these may also be called "bunches".

Not the answer you're looking for? Browse other questions tagged word-usage american-english british-english singular or ask your own question.

15
“Mobile homes” in American and British English
0
writing dates in British English
1
except for=but for in British English?
0
Comb vs Braid (or any specific hairstyle.)
1
Do we say “put your hair roller on your hair / head / bangs”?
0
Are they the same “She is drying her hair off” and “She is drying her hair up”?
0
Do we say “she is spinning or swinging her hair around”?
0
How do we express people with very special hair styles, for example, “he is wearing his hair in 3 bamboo trees”?
1
Is “lovely” a common word in American English?