Could I use both options? And which one sounds better?

It depends what you wish to convey. That is, there is context required to decide. 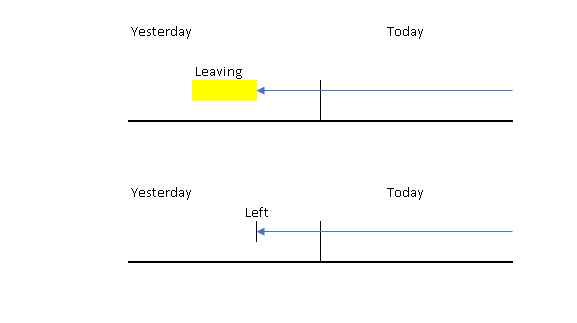 The phrase "was leaving" indicates a process that took place over time. So if you say "yesterday he was leaving by cab" then that's like the first version. The "leaving" is the yellow bar that covers some finite time.

If you say "yesterday he left by cab" then that's like the second one. It's a single event that happens at a moment. Or, for purposes of writing a sentence, a very short duration that you don't want to divide into smaller parts.

Think of it another way. If you say "he was leaving" then he might have been interrupted during his leaving. He might have paused. Or changed his mind. Or you might intend to say that his leaving involved many other sub-events such as saying goodbye to each person, putting on a lot of clothes, checking his tickets, etc.

But if you want to refer to the specific event you would just say "he left."

Not the answer you're looking for? Browse other questions tagged tense or ask your own question.

4
Should “Apple has launched two phones yesterday” be past tense or present tense?
5
He won't have gone yesterday
2
present continuous or simple present
2
“He was waiting until after I left to eat my cake.” — What verb form should be used after 'until after'?
3
Could not help but xxx-Time tense
3
Is “… and go to work by car.” correct in this sentence?
0
Usage of 'yesterday' in Present Perfect - is it grammatically correct?
0
My car breaks down and some variations