What is the part of an outer mouth that is limited between the upper lip and nose called in everyday conversations? 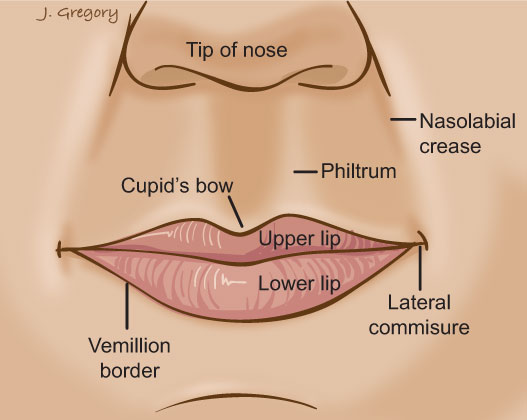 What is the part of an outer mouth that is limited between the upper lip and nose called in everyday conversations as shown in the picture.

It seems that the technical word for it is "philtrum" but I don't think people will say it in everyday conversations.

Can we generally say "upper mouth"?

For example, "Look! Your upper mouth is swelling. What did you do to it?"

"Under your nose" in my experience. Especially given its usage is pretty much limited to telling people that there's some food or the like on that part of the face.

I believe Philtrum specifically refers to the two raised, vertical ridges above one's mouth or perhaps the dip between those two ridges.

The actual area of skin above the red/pink part of your lip and the bottom of your nose, basically the flap of skin covering your upper, front teeth, is called the upper lip, just as the red part of your lip would be called. I don't believe there exists a single word to distinguish the two parts.

Upper Mouth is more likely to be understood as the roof of your mouth (i.e. the top part of the inside of your mouth.)

Perhaps something like the whole of the upper lip could be used to distinguish between red lip and skin lip. NGrams might help here.

Not the answer you're looking for? Browse other questions tagged word-usage word-choice word-request phrase-usage phrase-request or ask your own question.