What are the subtle differences between all these phonemes regarding the letter or sound “a”? 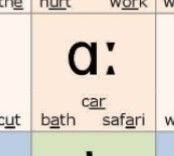 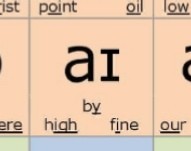 I'm a Spanish native speaker and to me, all these phonemes sound quite similar.

What are the little details that make these sounds different?

The position of the tongue (high, low, front, back) the length of the vowel and in the case of /aɪ/ the fact that it is made of two sounds merged together.

The sound in "cat" has the tongue further forward than in Spanish "papa", nearly as far forward as Spanish "les" but more open than "les" (as open as papa)

The sound in "up" has a similar tongue position to Spanish "no", but it isn't rounded, you don't purse your lips to say it.

The sound in car is similar to "papa" but longer (and slight further back).

The sound in high is a dipthong, made by blending from an a to an i sound.

In short they are different, and different from the Spanish vowels.

I agree with James K's answer, but I would add:

Not the answer you're looking for? Browse other questions tagged phonetics or ask your own question.

0
Word Stress in What am I supposed to do?
2
Pronunciation practice (J and Z)
1
why the word “ergative” sounds like /ˈɜːrgetɪv/ but it's phonetic symbol is /ˈɜːrɡətɪv/?
2
Should the last letter 'd' pronounced in word 'independent'?
3
What is the difference between /ʌ/ and /ə/?
1
Are /s/ and /z/ really distinguishable at the end of a word?
1
Are the phonemes [i] and [i:] “allophones” of the phoneme [ɪ] in General American?