Pronunciation rules for “CH” and “arch-”

When I googled the word arch I found four different meanings and usages. Two of them are just the raw words arch, while one uses it as a prefix (arch-) and another one as suffix (-arch).

Also, I would like to know the etymology of these words and how come they are pronounced different if they have the same Greek origin word arkhos (I did not make it, Google said that)?

There are no consistent rules for the pronunciation of the digraph ⟨ch⟩; it can be pronounced either /k/ or /t͡ʃ/, depending on the origin of the word.
There are some general guidelines, but they too have exceptions.

Adam Brown in his Understanding and Teaching English Spelling suggests that the digraph ⟨ch⟩ has three main pronunciations [modified]:

When the digraph ⟨ch⟩ precedes a consonant in a single word, it's almost always pronounced /k/ and not /t͡ʃ/, probably because English Phonotactics doesn't allow affricates (/t͡ʃ/ and /d͡ʒ/) in complex onsets i.e. /t͡ʃ/ and /d͡ʒ/ cannot make an onset cluster. Therefore the ⟨ch⟩ in words like chlorine, chrome, Christ etc., is pronounced /k/.
Words starting chr- and chl- are mostly of Greek origin and are pronounced with /k/.

The ⟨ch⟩ is usually pronounced /k/ in words that are derived from Greek like monarch, amphibrach, anarchy, archaic, anchor etc.

The prefix arch- is derived from Greek and it means important or chief. It has a few forms in English (arch-, archi- and arche-), all borrowed from Greek (arkh-, arkhi-, arkhe-) which is confusing.

The only thing that comes to mind is that it's pronounced with a /k/ in simple words like architect, archaic, archive etc., and pronounced /t͡ʃ/ in compound words such as archenemy, archbishop, archduke etc., though it has many, many exceptions like archangel.

⟨arch-⟩ in the beginning of Greek words

When ⟨arch-⟩ begins a Greek word and is followed by a vowel it's almost always pronounced with a /k/ as in archangel, archipelago, architect, archive, archaism etc.

⟨arch-⟩ in the beginning of English words

When the ⟨arch-⟩ is prepended to an English word and it begins with a consonant, it's almost always pronounced with a /t͡ʃ/. Examples include archduke, archdeakon, archbishop.

There may be exceptions and irregularities, however.


Quotes from other sources

According to the Dictionary of the British English Spelling System by Greg Brooks, the digraph ⟨ch⟩ is also pronounced /k/ in words that begin with ⟨arch-⟩ when followed by a vowel letter as in archaic, archive, architect, archetype etc. However, there are only two common exceptions; arch-enemy and archer.


According to A Survey of English Spelling by Edward Carney, ⟨arch-⟩ is pronounced /k/ before i and y, though he doesn't explain it further and leaves us with many questions.


According to The History of English Spelling by Upward and Davidson, the English value of ⟨ch⟩ as /t͡ʃ/ originated in Old French and was integrated into English after the Norman Conquest. They've given some other examples like bachelor, brooch, butcher, chair, chamber, chance, exchequer, franchise, merchant, treachery.

Here's a more detailed explanation of the ⟨ch⟩ in The History of English Spelling: 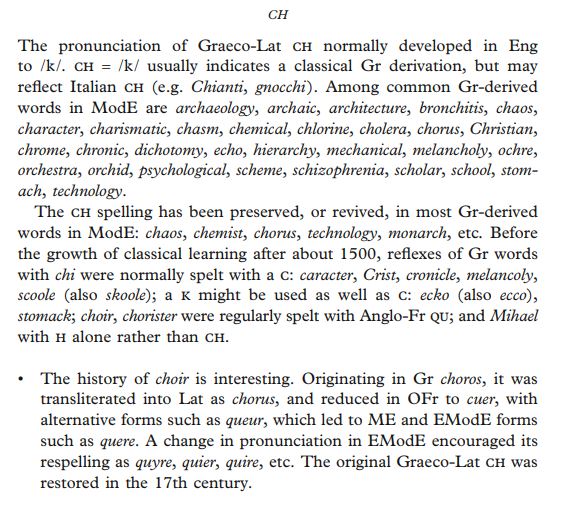 Also from English Words: History and Structure by Stockwell and Minkova:

Not the answer you're looking for? Browse other questions tagged pronunciation etymology suffixes prefixes or ask your own question.

-2
Reason or rule for pronunciations