Between vs. Among - "Difference [between | among] one thing and other things."

Consider the following two versions of a question:1

Don't get me wrong: I do think this is quite subtle, not always applicable, and I don't think anyone would intuit such a "network topology" meaning without further explanation.

So the main question is, are both grammatically correct? If yes, is there a semantic difference to choose one over another, perhaps as I suggested? Or does the plurality aspect of between and among trump other semantic and stylistic issues?

1. In my question Does placement of "not" have significance? Not to be verb, To not be verb, To be not verb, another user provided a very helpful edit. However, the change of the word between to among prompted this question.

This is tricky. Conjunctions and prepositions are among the most difficult meanings for semanticists to describe objectively, and this is why they often have the longest entries in dictionaries.

Note that in the previous sentence, between would not have worked in place of among.

Between implicitly suggests a cline or planes of possibilities - it can be an n-dimensional plane, and whatever it is you're talking about lies somewhere in relation to other, points on it.

The very first sense of 'between' on Collins echoes this sentiment:

This is likely why you have intuited that between seems to suggest a star topology in network parlance.

Among(st), on the other hand, is subtly different - it merely suggests a relationship to other things, without making claims to where it stands. If you consider a scatter plot, you could say that any of the points lies amongst others. 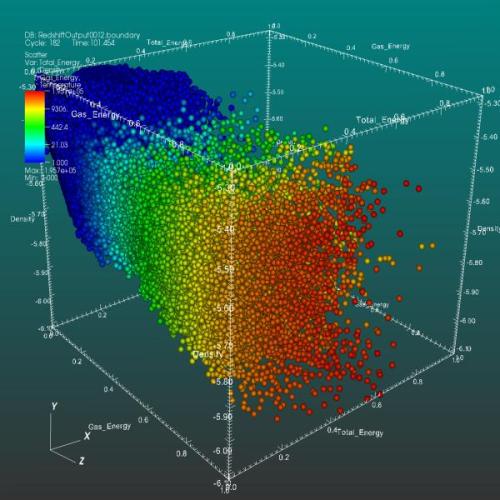 There is the possible exception of outliers and those points which lie on the edge of the groups, but that becomes a much more difficult issue to manage, akin to Sorites Paradox. My response to that is that the following sentence seems perfectly grammatical and sensible:

He was the smartest by far among those students in his age group.

The definition for among(st) on Collins suggests a couple of relationships:

Of course, definitions can quickly become circular - that is, how does "in the midst of" differ from "between"? In the midst of seems to invoke a sense of positioning, rather than just that of relationships in general. The positioning can be based on anything, really, but among seems more felicitous when used in the description of vague constellations of meaning and relations, and between in those that are a bit more explicit.

"In the group of", on the other hand, is a much cleaner relationship.

Overall, the difference between between and among seems to be a fuzzy one - in the preceding clause, among would not have worked in place of between. I would say that between is better-suited for more explicit relationships, and among(st) for messier, more vague constellations of relations.

If the question had read "what are the differences in meaning amongst negated forms (for example [to be] not invited)?", between/among(st) would both work well.

I know I'm late to the party, but I'll share what my English teacher taught us:

"Between" (in the sense of to "choose between" or "divide between") strictly applies when there are exactly two things to choose or divide between.

"Among" is used strictly when there are more than two.

This works much better negated: I.e. What are the similarities between/among

Not the answer you're looking for? Browse other questions tagged meaning meaning-in-context between-among .

3
Use of "among" and "between"
2
How to use "between" for more than two objects?
-1
Usage and meaning of Between and Among:
5
Describe the difference(s) between A and B
4
Does placement of "not" have significance? Not to be verb, To not be verb, To be not verb
0
Why does it use 'among', not 'between'?