If a noun clause acts as the subject of a sentence, is it no longer a dependent clause?

If a noun clause acts as the subject of a sentence, is it no longer a dependent clause?

I just saw this on a site so I wanted to see if it's true or not.

[What he did] was outrageous.

"What he did" is not a noun clause (even if there were such a thing, which there isn't), but a noun phrase in a fused relative construction.

The pronoun "what" is simultaneously head of the whole noun phrase and object (in prenuclear position) in the relative clause.

It means "That which he did* (or the thing that he did") was outrageous".

EDIT: Below is a tree diagram of a similar example showing the structure of a fused relative construction with "what" in prenuclear position. As the diagram shows, "what" is co-referenced by the i subscript to the direct object in the nucleus clause. 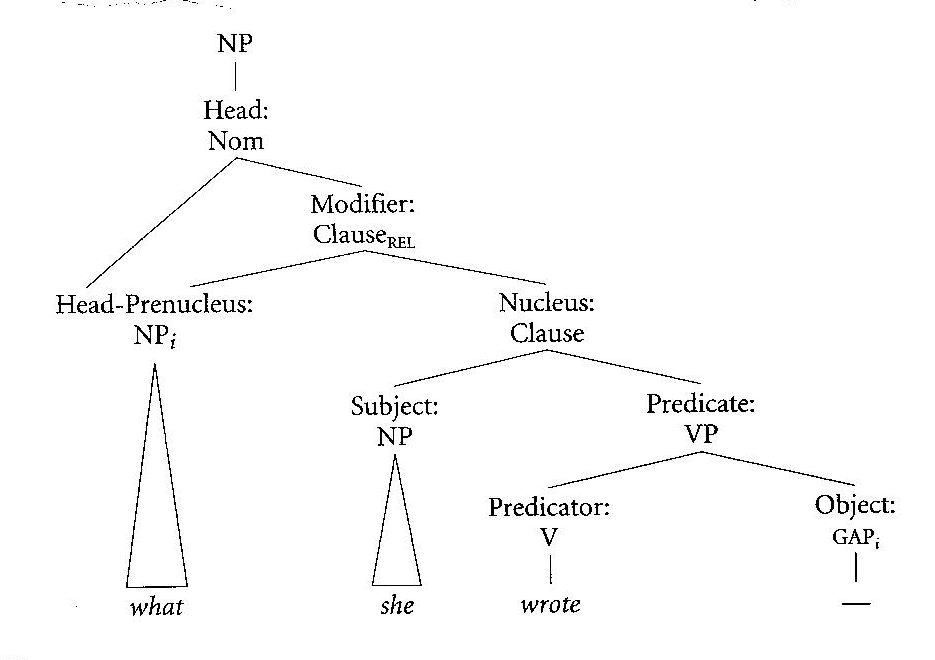 Not the answer you're looking for? Browse other questions tagged clauses .

2
"It was an admission that all might not be right between them." - that-clause as subject.. or not?
0
Wh-words and noun clause
1
What is the subject in the object clause?
1
Two Questions about noun clause
1
What is the function of ‘before clause’ in the sentence？
2
Why is an infinitival clause called a clause even if it has no subject?
0
When the action in a noun clause happens in the future, which tense should I use in the noun clause?
0
Subject clause or attributive clause?
0
What type of dependent clause is "just so you know"?