“Cthulhu Fhtagn” - is there a rule how to pronounce artificially created words? [closed] 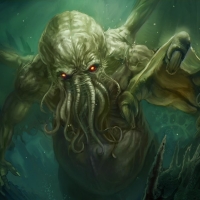 There are many such words in a fiction literature, including Jabberwocky, Cthulhu, Kilrathi, and many others. Of course, the authors intended to make these words appear most uncommon to an English reader, and it must have been a deliberate attempt to make the pronunciation unclear.

Being an English learner, I, most likely, have read those books translated to my language, so it is very possible that my pronunciation is somewhat spoiled (even if my language uses Latin alphabet).

An obvious way is googling for each individual word to see how it is suggested to pronounce each one. However, this is not the case if you are involved in a spoken discussion. You simply have no possibility to search.

So, is there any simple, mnemonic rule how to pronounce an arbitrary artificially created word?

Update: I see close-votes on this question, so I have to explain myself.
Not knowing how to pronounce a word may lead you to an embarrassing situation.
Actually, a comic below illustrates very well what happens if you pronounce R'lyeh wrongly: 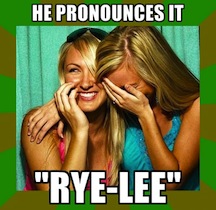 Unfortunately, the answer is no. There are no such rules.

However, there are tendencies. Words tend to be pronounced like other words they look similar to. For example, if I wrote the following words, I would expect them all to rhyme with piffle:

However, if I wrote the following words, it'd be ambiguous because there are similar-looking English words with differing pronunciations (bough, though, through, rough, you):

The pronunciation isn't well-specified in the first set of words or the second, but with the first, I can tell how they're probably pronounced. With the second set, I can imagine any number of pronunciations.

Your example, "Cthulhu Fhtagn", fits into a third category. It doesn't resemble any English words! The only reason I know how to pronounce "Cthulhu" is that I've heard it pronounced. "Fhtagn", on the other hand, I've never heard, so I have no idea. When you can't guess a pronunciation, you have to ask the creator of the word how they intended to pronounce it, or (if the word has become widespread) ask someone who's heard it how they pronounce it.

For another example, look at Tolkien's made-up words and names. How would you pronounce Cirdan? If you didn't know what Tolkien intended, there'd be a number of plausible pronunciations.

But take heart. If you pronounce a made-up word incorrectly, you're in good company.

3
What Victorian profanities might Charlotte Brontë be referring to here? (in Jane Eyre)
5
How do you pronounce names?