To bend the searchers over double.

What is the meaning of the bold part? I know what bend double means but I am not familiar with bend someone over double, and I didn't find anything in dictionary. Please help.

To bend over is to lean down from the waist, to whatever degree, usually by choice to pick something up. It is pretty much equivalent to bend down. This is the best picture I could find online (ignore the big red "not" sign, I think it's trying to instruct people not to lift heavy things that way, and it's not the point; I just couldn't find a better picture). 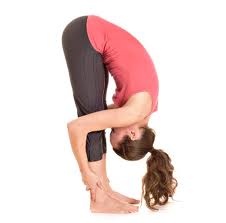 (Except the wind is doing this to them, and the girl in the picture is using her arms and doing it on purpose for yoga or something.)

So now we understand what to bend over double means. But to add to your semantic confusion, in your example sentence the people aren't intentionally bending over double on purpose; the wind is doing it to them. If they were doing it intentionally, you'd have something like this:

Tom suddenly got a severe stomach ache and bent over double.

But since the wind is doing it to them, you get the construction in your example:

...winds gusting strongly, enough to bend the searchers over double.

So the winds were strong enough that they forcibly made the searchers bend over double.

In this image, the orange cord is bent over double. (It is bent or folded back upon itself.)

To bend means to fold.

In the case of a body, you bend one's body so as to bring distant parts into proximity (my OED definition of double up (8b) which gives the same idea.)

For a person to bend over double, it does not necessarily mean that the person is bending all the way down, back and knees straight, and touching their toes.

In general one bends over double by bending at the waist and leaning the torso forward over the body, And it can include a posture with the hands or arms resting on one's knees.

In the passage, the phrase to bend the searchers over double can be read in the transitive sense: the gusts of wind were string enough to fold each searcher back upon himself.

Another possible interpretation is that gusts of wind were so strong that they caused the searchers (in the intransitive or reflexive sense) to bend over double, so as to make headway against the gusts, or shield themselves from the gusts, their face from flying debris, etc. They were bent over double, that is bending deeply from the waist, torso leaning forward over their body, but they were not touching their toes.

(To be bent over double can mean to be bending at the waist, knees straight and touching one's toes. Except, in my mind, that posture does not fit the description of the passage at hand, unless it means that the wind was able to bend the searchers over double in a figurative sense.)