Why is this so that some consonants take final or front position in words?

I noticed this in many words e.g. puLP, the cluster /lp/ can take place in final position but not front.

I won't go into details, but here's a brief account of how consonants are arranged in consonant clusters:

A sequence that is allowed in one language may be disfavoured in another language for instance, the cluster /pn/ is phonotactically well-formed in Greek, but ill-formed in English, that's why the /p/ in pneumonia is silent in English.

Over time, a language may undergo phonotactic change, for example, the /k/ in the word knight wasn't always silent as it is in Modern English, it was pronounced until Modern English.

Some of the constraints on syllable structure in ModEn are:

There's a concept of Sonority, which is a relationship between sounds and how they are arranged within syllables.

A sonority hierarchy is a hierarchical ranking of speech sounds. A typical order of Sonority values is:

It means that vowels are the most sonorous and plosives are the least sonorous sounds. Vowels ([ɑ æ i ɪ ɔ u] etc), glides ([j w]), liquids ([l ɹ]) and nasals ([m n ŋ]) are called sonorants, while the rest are called obstruents.

In phonology, we have a rule called Sonority Sequencing Principle which states that sounds rise in sonority from the onset (beginning of a syllable) to the nucleus and fall from the nuleus to the coda (end) of a syllable.

Here's a Sonority graph that illustrates how SSP works: 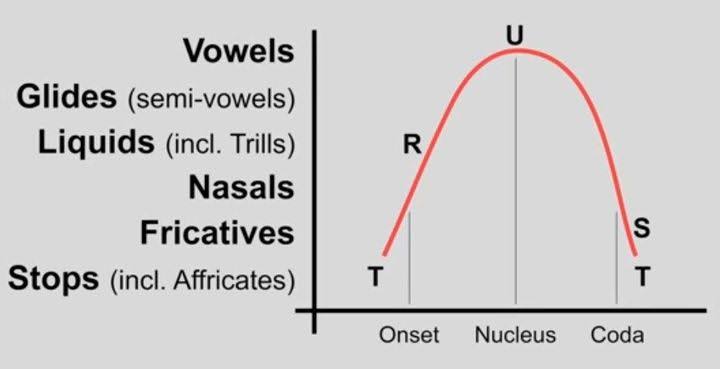 It's a sonority graph for 'trust' [tɹʌst]. Sonority should rise from the onset to the nucleus (usually a vowel) and then fall from the nucleus to the coda, which is indeed the case in [tɹʌst]:


The reason why certain clusters don't occur at the beginning of a syllable is because they violate the Phonotactics of English (Sonority Sequencing Principle).


The cluster /lp/ can occur at the end (coda) because it's concordant with the SSP; the Sonority falls from /l/ to /p/ (Sonority should fall in the coda).

However, it does not occur in the onset because the sonoriy falls from /l/ to /p/ rather than rising (Sonority should rise in the onset).

There are lots of other restrictions and exceptions like clusters with /s/, but I'm not going to discuss it further.

17
Why are there three pronunciations for the plural "-s"?
4
Why the K is silent in "know" and "knowledge"?
2
How to make syllable structure and sonority graph of "twelfths" and "grudged"?

0
What are the difference between Australian and RP, Received Pronunciation
6
I am a native Italian speaker. How can I avoid putting extra vowels on the end of words that end in consonants when speaking English aloud?
3
Do native English speakers always pronounce `th` correctly?
2
Can I make an unaspirated /t/ sound in the words like "best", "chest", "belt" etc. in American English?
41
Why is "iron" pronounced "EYE-URN" but not "EYE-RUN"?
1
Why are the vowels in "decisive" and "decision" different?
4
Why does "wind" have two different pronunciations?
0
Which of the two different pronunciations of /z/ is correct?