Meaning of the phrase tossed upon life's billow

What is the actual meaning of the phrase tempest-tossed upon life's billow.

Does it has the same meaning with dogged by misfortune

It literally means 'thrown around by storms on the waves of life' (Your phrase actually has billows in the plural.) It's a metaphor for having a hard life.

tempest = storm
billows = things that flutter and fill with air or wind, also used as a verb
life's (thing) = indicates a methaphor, the (thing) as it happens in life, depending on if (thing) is positive or negative.

So here we have a storm's fluttering things, not particularly positive or negative but certainly chaotic, uncontrolled and unpredictable, used as a methapor for things happening in life. so it broadly means "his life has been unpredictable and chaotic"

The second one "dogged" here is in the meaning of being chased persistently. Think of a dog that won't give up. Misfortune is the opposite of fortune, luck.

The metaphor is that each of us, as a human being, is a ship crossing the ocean of Life. Sometimes this metaphorical ocean will be calm and sometimes stormy. The poem that uses this phrase is saying, "When life gets tough, count the good things that you have and thank the Lord for them."

There's an old hymn about counting your blessings that starts out: "When upon life's billows you are tempest tossed"... isabelbarnsley.blogspot.com 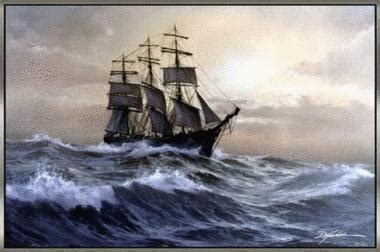 When upon life’s billows you are tempest tossed,

When you are discouraged, thinking all is lost,

Count your many blessings name them one by one,

And it will surprise you what the Lord hath done.