He missed the car in front by that much

What does this sentence mean?

Imagine Obama comes up to you and says

I missed hitting the car in front (of me) by that much. I almost hit it. Luckily, I didn't. 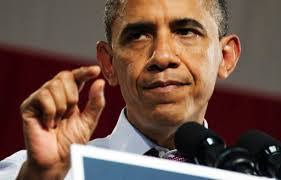 in front means located before, by that much explains the extent/degree of something (here, the distance between the two cars).

Yes, "in front" modifies "the car." It tells you which car he missed.

The phrase "by that much" is a cultural thing. One source of popularity is a 1965-1970 TV show called "Get Smart." The main character, Maxwell Smart (doing the hand gesture in the image), would explain to The Chief, that some bad thing had been narrowly avoided. Often the "it" that was missed would be something in the general location of some unfortunate man's groin.

Correct - the car (that was) in front is the one that was missed.

The amount indicated has to be deduced from context. Usually, there is a visual indication accompanying the speech, but the phrase could be used on radio or in writing. In this context, we can tell that the speaker is emphasising that an accident almost happened, so we imagine "by that much" to be a very small amount.

When something is missed by a large amount, a different idiom is used. For example:

The footballer missed the goal by half a mile!

(If not clear, that's using exaggeration to mean "a large distance")

So the original sentence could be rewritten as

He very nearly hit the car in front.

The other answers are all correct and quite complete.

Note however that just to make matters worse, this type of phrase that can further be used sarcastically (or is it ironically?!?). And when used in this way, the reverse idea can actually be meant. For example if my friend, after watching my attempted putt for birdie in golf, said:

You missed it by that much!! (perhaps while making the same 2-finger gesture)

... I might be on my way to making quadruple bogey.

English can certainly be silly complicated!

It is most likely that

was intended to mean he missed by a very small distance. But it is not impossible that it instead is meant to indicate that he crashed into the car in extreme or amusing fashion, if it fits the context better. Tone of voice can often be used as a signal (sarcasm will usually be said in an exaggerated, emphatic tone).