What does "live local" mean?

I found it in a list of pet peeves of somebody in the internet through searching that what pet peeves mean. Now, I know what pet peeve is but there is another problem with "Live local!" which I want to know the exact meaning,usage and formality/informality rate.

Apparently, it means go and experience new things same locals from that area are doing it but I am not sure about this usage and also want to know the other usages if there is any more.

Can I use it in my conversations with a native to encourage her/him in protecting local life in her/his hometown? Is this a common phrase or only a kind of esoteric phrase and inappropriate in the modern English?

Jim has hit the nail on the head; Live Local is a movement designed to encourage folks to support their local economies and businesses.

generica
What most of America, particularly Middle America, has become characterized by the ubiquitous Wal-Mart, TGI Fridays, Applebees, Chili's, Gap, J Crew, Best Buy, Target, Olive Garden, PetCo, McDonalds, Banana Republic, Border's, Costco, Home Depot, Nordstrom, Circuit City, KFC, Sports Authority, Starbucks.. and on and on it goes.... until every city/town/suburb starts to blend in and look like one big flavorless mall... where all the people, genericans, mindless zombies, consume and consume and consume.... slaves to corporations and keeping up with the Jones'...

As we travel through and across the country, it's becoming harder and harder to find mom-and-pop businesses among the restaurants and shops of a particular region. Live Local, then, is an exhortation to actively support such businesses, lest the last vestiges of local color die out from a community's restaurants, inns, and shops. It almost requires a certain grass-roots mindset to keep these businesses viable, because it's difficult for them to compete against the larger, more prominent chain outfits, which are usually much easier to locate and recognize.

Can I use it (live local) in my conversations with a native to encourage her/him in protecting local life in her/his hometown?

If "protecting local life" means "keeping local businesses healthy", then you could use that expression. However, it's not a particularly common idiom, and there are other ways you could express the same sentiment that might be more understandable. Perhaps the most common way to convey that thought is the phrase "Buy Local", but there are many catchy ways one could encourage the support of hometown businesses. I found these graphics by doing a Google image search on "support local businesses": 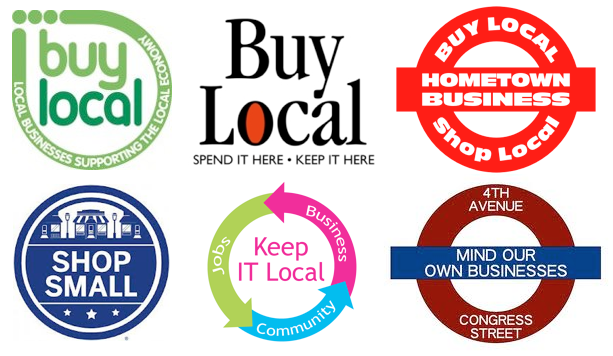 The one in the bottom right corner is a particularly clever pun. The expression "mind your own business" is usually an admonition to not meddle in the affairs of others. However, in this context, the word mind is being used in the sense of take care of (that is, the meaning of the word shifts from Definition #20 to Definition #22, as listed in this dictionary entry). While the pun is clever as part of an ad campaign, I would not use it in day-to-day conversation, lest it be misunderstood.

Live Local is a movement aimed at supporting one's local economy by trying to consume only locally produced food and goods. Many cities around the US, Canada and Australia, and maybe more, are embracing the Live Local movement.
Alberta
Marin County
East Dallas, Texas
Columbus, Ohio

The use of adjectives in this way is not uncommon. I have seen in the UK, for example, Eat healthy. I don’t know whether or not it is a recent development, but, if it is, that may in part explain the peever's objection.

Not the answer you're looking for? Browse other questions tagged phrase-usage .

2
Bumper sticker: "Eat Local"
4
Should the adjective "local" get the noun that it describes?