Are you an English? Are you a British?

I once encountered a lady who seemed to come from America or the United Kingdom. When I asked Are you an American? she said no. I was reluctant to ask if she is an English because it sounded very strange. I learned from this answer that it would be right to say Are you English? but it also sounds strange to me. I know it might be right. I wonder if I can say Are you a British?

I learned from the dictionary that both British and English represent the British people or the people of England. They are both plural nouns.

It's a peculiarity of the language that in some cases the noun for a person of a particular nationality is the same as the adjective, in other cases it is not.

He is German - a German.

... but we can't say He is a French or She is an English. It's perfectly correct, and much easier, to say She is English/British/French. The nouns would be Englishman/woman and Frenchman/woman. There is a noun for a British person, Briton, but it is not much used in everyday conversation.

Ask "Do you come from Britain?" or "Are you British?"

I'm afraid it is just one more of the odd things about the English language that you have to memorise!

National identity is a complex thing, especially when a person can have more than one identity. Consider "Are you Chinese?". A person can be "Chinese" but live in Singapore, the US or anywhere in the world. A person can live in China, but is not Han Chinese (Yi, Tibetian, Uighur and so on). Or be Han Chinese, but from one of the regions (Hakka, Wu, Yue etc). Are you "Chinese"?

Are you English? is a perfectly correct question. I'm English, but I'm also European and British, a Sussexite, and a Citizen of the World. My brother-in-law is Scottish, though he lives in England. His kids are English (but support Scotland in the rugby). My friend is British, and English, and Indian, and Keralese. My nephew is American and British and Canadian and Indian and Pakistani and a Marylander...

As with any personal question, first think "Do I need to know?" So if not, then it's probably best not to say anything. If you ask "Are you American" and she says "no" but doesn't say anything else, then that is a strong hint that she doesn't want to talk about it. If you do decide to ask then "Are you English?" is correct and doesn't mean "Do you speak English". But be aware that many people in the UK do not identify as "English". "Are you British?" is also correct, (but for people in Northern Ireland, that question can start fights.) "Are you from the UK?" is also correct.

The question you ask depends on why you want to know.

You can sidestep all the problems that might arise from them identifying as Welsh, Scott or as a Briton from Australia or such places by simply asking them where they are from though if you're curious - this is perfectly acceptable and has little risk of offending anyone except if you're asking it near to the place they are from implying that they would have a weird accent or mannerisms for the locale you are currently in - but say if you meet someone abroad in a country and they seem foreign to that country it's perfectly acceptable to just ask where they are from if you're in conversation with them.

If someone is speaking fluent native English though I often just ask "so are you from America, England or where?" because I can make a guess where they are from but it might not be correct. Never had a "kiwi" or an "ozzie" throw a fit over it and if they are from a non English speaking country it just works as a compliment on their English skills.

tl;dr– Probably easiest to just ask someone if an adjective describing a nationality fits them. Historically, nouns were constructed as [adjective]+"man", with some being truncated to just [adjective] if the compounding sounded redundant, though since the non-truncated variants may carry some cultural baggage, it may be advisable to avoid them in favor of just using the adjectives.

Ask if they're described by an adjective or are a noun.

In some cases, compounding [adjective]+"man" can sound redundant, e.g. "German-man" or "American-man". In these cases, the +"man" suffix seems to be dropped, such that it's just "German" and "American".

However, the non-truncated nouns aren't as common now; they seem to have acquired some weird cultural baggage. For example:

The truncated-nouns probably dodged acquiring this baggage by being homonyms of the adjectives, so while "American" and "German" are pretty neutral, it's probably advisable to avoid most of the terms that explicitly end with "man".

The above discussed [adjective]+"man" with respect to nationalities.

The same construction is used in other places. Examples:

The major caveat is that there's a lot of interest in gender shifting some perceptions of "man" being exclusively masculine. So in some cases, folks'll use [adjective]+"woman" for females or [adjective]+"person" for gender-neutrality.

Be careful what you ask, if she's Welsh, she should answer 'yes' to "Are you British", but 'no' to "Are you English". England is a part of Britain, but so are Scotland and Wales. This doesn't directly answer your question, but may help clarifying what you should ask and what the responses may mean.

Phrasing the question in terms of the national identity of the individual, either as a noun or adjective, has commplexities. Many historically-normal nouns are gender-specific; as two of the prior comments say, "Englishman" is not suitable for a woman, no matter how convenient it would be if it were. And many countries' names have been co-opted as ethnic identifiers; so someone may identify as Chinese even though they're several generations North American born, when what you wanted to know if if they were, themselves, from China. Conversely, a member of an ethnic minority group might not identify with the name of the country they're a citizen of, where ethnic or regional idenities are strong. (I once asked a new neighbour if she was Italian and she said, "No, No, Calabria!")

A very good tack might be to phrase the question as "Are you from —". This is much safer as country names are well standardized and do not bear on the gender or ethnic identity of the person. There are a few difficult cases; what Britain means, for example, remains opaque to many anglophone North Americans, and a few nations have names in a state of politically-charged flux, but these are rare and if you use the name generally accepted internationally you should be ok.

I want to add, though, that in your example, I would take it as odd that the lady you spoke to just said "No" and nothing more. Far more common would be to say, "No, Canadian" or "No, Australian" or even "No, why do you ask?". Just a simple No is more likely to indicate she didn't feel like talking; and I doubt very much she'd welcome a game of 20 Questions where we listed off all the countries we could think of.

-ish 1. a suffix used to form adjectives from nouns, with the sense of “belonging to” (British; Danish; English; Spanish); “after the manner of,” “having the characteristics of,” “like” (babyish; girlish; ...

The noun is Britain/Brit, the adjective form is British.

"Are you British?" means "Are you [belonging to Britain]?"

In the above, don't use "a" because "British" is an adjective.

"Are you a citizen?"

In the above, you use "a" because "citizen" is a noun.

"Are you a British citizen?"

In the above, "British" clarifies the type of "citizen" as an adjective. Still use "a" because "citizen" is a noun.

Other nationality-words like "American" get used as both a noun and an adjective, the other answers already went into detail about that.

You are discussing locatives. Since locative usage can differ from that of other uses of the same word, there can be some confusion.

One would not say

Are you an English?

The two correct alternatives use the locative and use "English" as an adjective:

Are you English?
Are you an English person?

I learned from the dictionary that both British and English represent the British people or the people of England.

Then you need a new dictionary, with regard to that "English represent the British people".

Tl;dr - asking some Scottish, Welsh or Irish "are you English" may result in a sore nose.

How is your mathematics? Have you covered Venn diagrams? The internet is full of the likes of this: 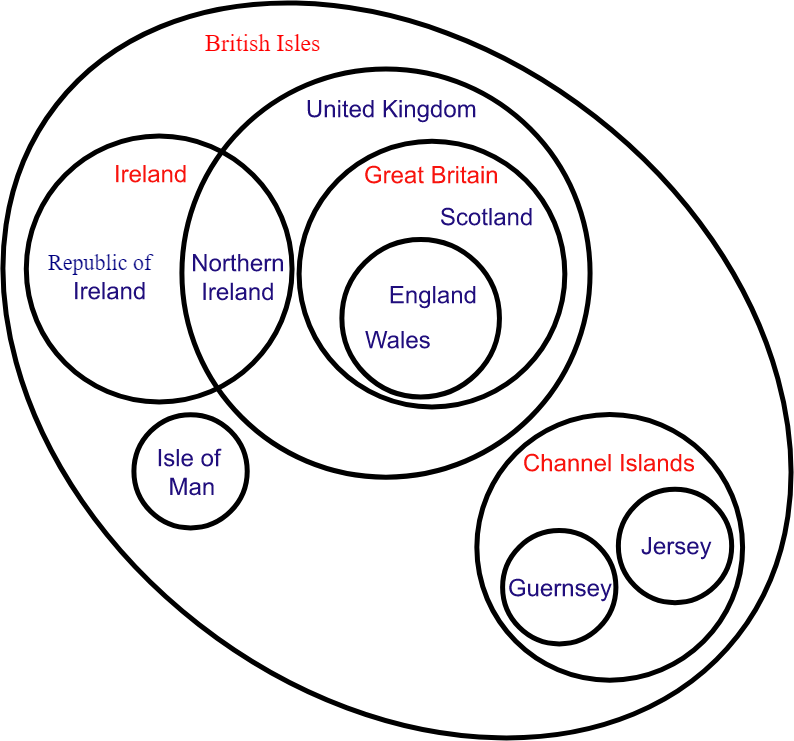 which is odd, in that it starts with Britain (England plus Wales). Here's a very simplified version:

The whole "British, or associated" thing gets vastly complex. For further, fascinating, detail of all things Brit-related, see this excellent page, which goes as far as 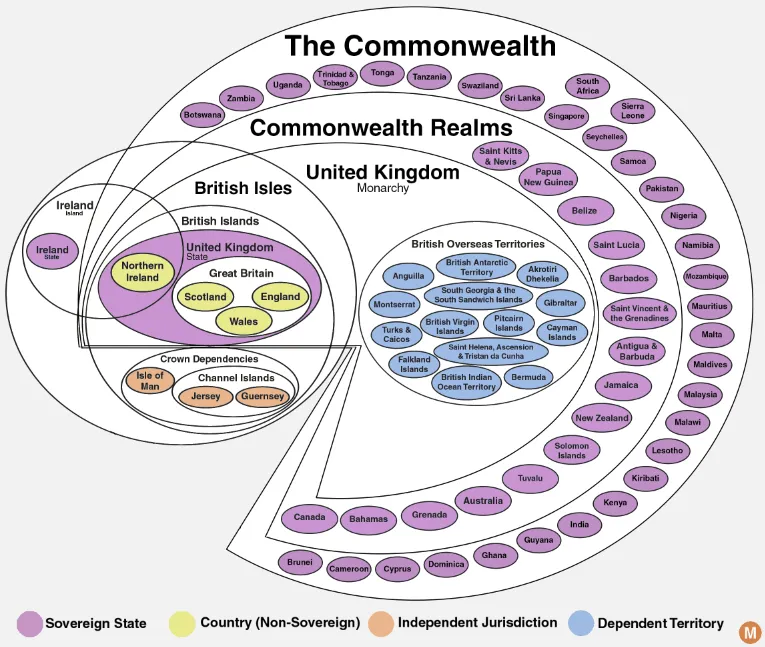 Not the answer you're looking for? Browse other questions tagged phrases spoken-english demonyms or ask your own question.

5
When we read a sentence, how should we pause?
8
Is it unpleasant to be called English when you're Scottish?
1
American's 'I've got' and British 'I've got'
0
Any difference between “Is it something you still think about” vs “do you still think about it?”
2
Backshifting the verbs in questions
0
Modern substitutes for saving your (presence / reverence)
0
The meaning and the usage of the expression “Don't you dare”