What is the word to say that something is located so close to something different, that there is no real distance between them?

Example 1: Three houses that are built with no physical distance between them. You know they are different houses and not the single one just because they are built in different styles.

Example 2: Two cars that are parked at a distance of one centimeter.

Houses that are side by side with no distance at all, and may share walls, are often called terraced houses (UK) or 'row houses' (USA). 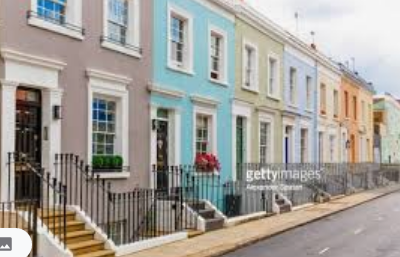 Two cars that are parked close together are 'close together'; there may be other things you can say about them, e.g. facing the same way, back to back, etc.

More than two items can be 'back to back'.

This is a picture of 'back to back' terraced houses: 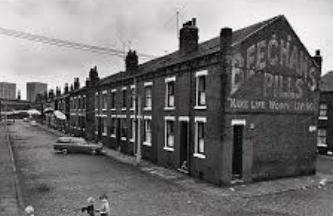 If two things are very close, they are adjacent. If there no distance between them, so that they touch, they are immediately adjacent; they abut each other; they are touching; they are in contact.

Back-to-back in AmE means happening one after another, without interruption, so it means close in time, not in physical position. "I've got back-to-back meetings today, so I won't have time for lunch."

In the UK, a specific type of terraced house that share walls with other houses is referred to as a "back-to-back". In AmE, it can also refer to two things positioned with their backs close together or touching, but it doesn't have the general sense of "very close together".

For physical closeness, a similar phrase would be "packed together" if there were many things in a small area. It is usually used when the area is confined, for example, The employees were packed together in the small conference room because the larger room was being renovated.

You could also say "crowded together" (To position things close together. In this usage, a noun or pronoun can be used between "crowd" and "together." :

I tried crowding all of my clothes together to make room for my jacket, but it still wouldn't fit in the suitcase.

Because the tall tombs resemble small houses crowded together, the cemeteries of New Orleans are often referred to as “cities of the dead.” (Source)

3
A colloquial name for juice boxes
0
Colloquial name for "natural fibre ropes"; picture included
2
the difference between "to revamp" ,"enhance" and "overhaul"
2
When a disease 'comes back'
0
A less extreme version of paranoia
0
similar words to "research", but less seriously
1
Colloquial term for "generous"
0
Word for a green space between two rows of buildings