Is it appropriate to use another verb after the main verb (main verb + subject + verb) in a sentence? and why?

I don't quite understand why it is grammatically correct to use another verb after the main verb (main verb + subject + verb) in a sentence,

I can't believe you remembered that blue is my absolute favorite color.

given that “believe” is not a modal verb or a verb that fits in " verb + object + (bare) infinitive" Syntax, like those words: let, make, see, hear, feel.

Could some explain it to me?

I can't believe [(that) you remembered that blue is my absolute favorite color].

The reason is that the bracketed expression is a separate subordinate clause that is embedded within the larger (matrix) clause. Note that the subordinate clause has its own subject, you, and its own predicate, remembered that blue is my absolute favorite color. Grammatically, the clause subordinator "that" can be optionally added, as shown.

The subordinate clause here is called a declarative content clause, and it is functioning as complement of the verb believe. It is not the object of believe, since objects are (almost) always noun phrases, not clauses. Believe is thus intransitive here.

Incidentally, your example contains the further subordinate content clause that blue is my absolute favorite color, functioning as complement of the verb remembered.

EDIT: The case against the term 'noun clause' (and thus against clauses as objects), extracted from a paper by Huddleston & Pullum, authors of CGEL: 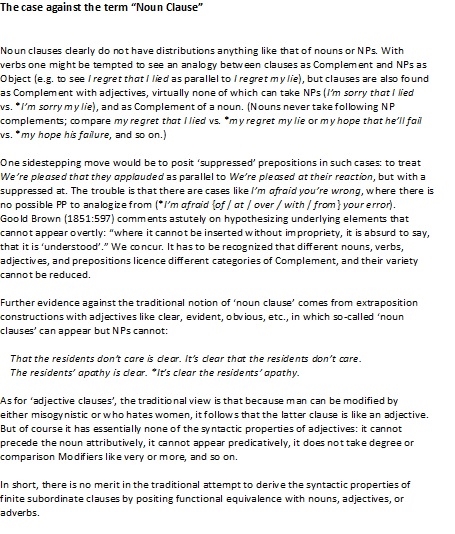 The verb "believe" has a complement, which is the clause

[that] you remembered that blue is my absolute favorite color.

(The word [that] is an optional subordinator, omitted in this sentence.)

In turn, the verb "remembered" has a complement, which is the clause

that blue is my absolute favorite color.

I have edited this answer, to replace "direct object" with "complement" because of BillJ's objection, which is valid. The distinction is that a direct object receives some sort of action from a transitive verb, and is affected by it, whereas the content of a complement clause is not affected by the verb whose complement it is, but instead provides information about it.

An object is what is affected by the subject while complement is a part of a clause following the verb that adds additional information about the subject or the object of the sentence.

Not the answer you're looking for? Browse other questions tagged verbs academic-writing .

3
After the verb "will", we must use another simple verb
1
Which is the main verb in this simple sentence?
1
Verb and subject in a sentence
1
Subject and verb of the sentence?
3
What distinguishes a predicative complement from a direct object?
0
The use of "prevent" with another verb
0
why we used plural verb with singular subject in the following sentence?
0
Why do we use base form of verb after the verb 'Do'?
0
Independent clause and main verb